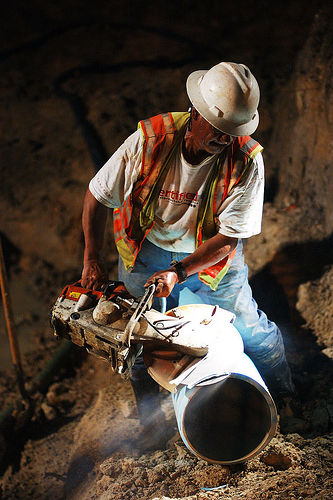 A new report by the AFL-CIO depicts how, even after four years since the recession officially ended, Latino workers continue to be disproportionally affected by the weak economic recovery.

The report released Thursday finds that as the U.S. economy recovers, Latinos are facing higher rates of unemployment and underemployment, as well as lower wages and bleak retirement prospects. The report comes on the heels of Labor Day, which will be celebrated on Monday.

“Latino workers have been especially hard hit by the economic crisis. It doesn’t have to be this way,” said Kelly Ross, deputy director for policy at the AFL-CIO, in a statement. “Low wages and economic inequality are the result of deliberate policy decisions that can and must be changed.”

“Increasing wages and reducing inequality is not only a matter of fairness and justice,” she continued, “it is also urgently necessarily if we want to fix what is wrong with our economy.”

The AFL-CIO report notes that Latinos were “severely affected” during the latest Great Recession, which began in December 2007 and lasted 18 months. Thousands of them lost their jobs and many of them remain unemployed.

What’s more, the AFL-CIO also shows that about one in five Latino and black workers are underemployed. An underemployed worker is someone who is highly skilled but works in a low-paying or low-skill job. It can also be a part-time worker who would prefer to be working full-time.

Latino workers earning less than others

When it comes to wages, Latino workers have seen an increase in their earnings since the beginning of the recession in 2007. But the AFL-CIO report points out:

“Although Latinos’ wages increased, they continue to earn smaller wages than other ethnic groups.”

To support this claim, the report compared the wages of Latino men to those of white and black workers. It shows that all full-time male workers saw their weekly wages increase 0.7 percent from 2007 to 2012.

During that period, Latino men saw their wages increase the most, going from $576 to $592. However, their wages remain well below the earnings of white and black men.

Perhaps the most pressing issue for Latino workers is the financial insecurity they face when they retire.

“Not only do Latinos have a steeper climb to prosperity during their adult life, elderly Latinos also are more likely to spend retirement at or near the poverty level,” the AFL-CIO report states.

According to the report, 70.1 percent of Latinos ages 65 and older have incomes less than two times the supplemental poverty threshold, compared to 43.8 percent of whites. This means elderly Latinos are more likely to be economically vulnerable than whites.

Additionally, though Latinos and blacks make up 15.4 percent of the elderly population in the U.S., they constitute 21.9 percent of the vulnerable elderly, meaning they are economically insecure.

The AFL-CIO report concludes by listing several solutions — offered by economists — that would help improve the prospects of Latino workers.

Economic Policy Institute President Lawrence Mishel and economist Heidi Schierholz offer several policies that would help generate wage growth. Some of those policies include reestablishing the right to collective bargaining and paving a path to citizenship for undocumented workers who are currently vulnerable to exploitation.

Ana Avendaño, AFL-CIO assistant to the president and director of immigration and community action, stated that the report “confirms the unfortunate reality that many Latino workers are struggling to provide even the most basic needs to their families.”

“This is wrong. Latinos work hard every day to build this nation,” she said. “Let’s honor Labor Day by advocating for policies that will allow them to reach the American Dream.”

Griselda, a native of Mexico, has a journalism degree from Arizona State University. Previously, she was sponsored by the Scripps Howard Foundation to intern with Hispanic Link News Service in Washington, D.C. She has contributed to various news outlets across the country.