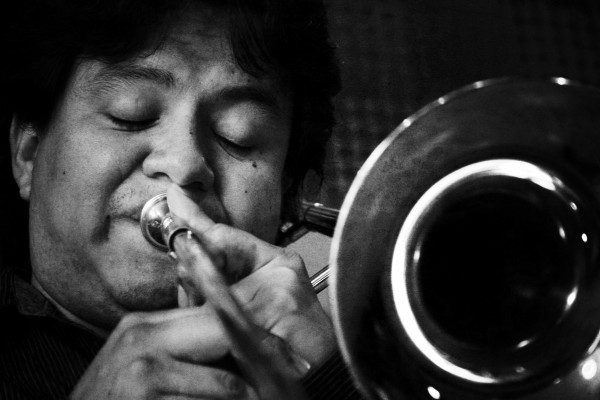 The world’s greatest trombonist appeared in a small music studio in the Pico-Union district of Los Angeles this week.

Three days later he was back in his village of San Lorenzo Cacaotepec (pop. 7300), playing danzones with the village band he grew up in, directed by his father.

Diaz has a beautiful story, which reminded me of so many Oaxacan immigrants in LA.

In his village, music possibilities were limited. So he left for Mexico City. There he improved, but as time passed he found he was still not the musician he thought he could be, even as he played in the philharmonic of the National Autonomous University (UNAM).

So a few years ago, he left the plum job with the UNAM philharmonic, gambled everything and moved to Rotterdam, Holland to study with Jorgen van Rijen, who remade his sound, tenderized his musical sensibilities that had been stunted by limited exposure to the world’s music and best musicians off in Mexico.

Showing the kind of gumption that has characterized so many immigrants, including his Oaxacan paisanos here in LA, he became a world-class musician himself.

He came in second in the trombone competition a year ago in Italy. But this year, seasoned and ready for his moment, Diaz beat a French and a Japanese competitor, and 46 others.

With hallucinogenic jet lag, he returned to a hero’s welcome back in Oaxaca, with a parade through his village, hordes of journalists to ask him how he did it, and the banda in which he first learned to play — trumpet initially, then trombone — ready to receive him.

Next day, he flew to Mexico City and was mobbed in a press conference there as well.

Diaz plays with an orchestra of children born to Oaxacan parents, and trained by Maqueos, tonight (Thursday) at the Mexican Consulate on 6th Street near MacArthur Park. 7 p.m.