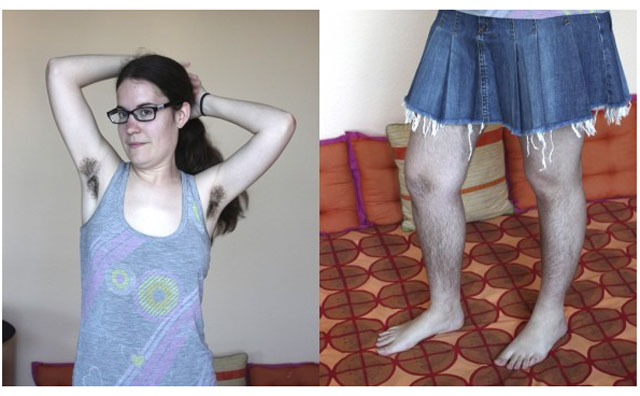 Over the course of the last couple of weeks, a post written by the Spanish journalist Paloma Goñi is creating controversy and conversation all over the Internet over her decision to stop shaving.

Goñi defines herself as “a very hairy woman” who one day got tired of the “hair removal torture” she had been suffering since her teens. So, Goñi decided to stop shaving. She asked her boyfriend (who initially refused) to take photographs of her showing her extremely hairy legs and armpits, and then she posted them on her blog to bring the subject up for discussion. While many of her readers praise Goñi’s authenticity and courage, many others are shocked by what they see as an attack on aesthetics.

Actually, it is, Paloma Goñi’s remarks. The aesthetic canon dictates that women do not and should not have body hair. But that’s simply not true of our species! So why do we submit to the endless torture of waxing, which can be incredibly painful in the case of hairy women, as Latinas often are?

“I’m amazed that we’ve reached the point where a woman who doesn’t get rid of her body hair, hair that grows naturally, is a rare specimen. I’m not judging the millions of women who wax because they want to (although we’d have to dig deep to know why they want to), but I am critical of the point we’ve reached where there’s no choice about whether or not we remove our body hair,” Goñi wrote.

Celebrities who do not shave

Actress Mayim Bialik is one of many celebs who don’t shave. She wrote in her blog that she have never shaved her legs. (Photo Wikimedia Commons)

Some months ago, “Big Bang Theory” actress Mayim Bialik wrote a column similar to Paloma Goñi’s in which she revealed she has never shaved her legs. A decision she made in her early teens and has firmly maintained all her life. She wants her sons to know that female body hair is natural. “I used to be hurt when other kids (girls especially) teased me for not wanting to conform to societal standards of beauty and aesthetics. I guess I hope that by simply being myself, my boys will find that character trait attractive and desirable in whoever they choose to love,” Bialik explained.

Mo’Nique is among the celebs who don’t shave. She told reporters she is very comfortable with it. (Photo Wikimedia Commons)

When surfing the internet for photos of celebrities who do not shave, the most remarkable case is the actress Mo’Nique Imes-Jackson, of “Precious,” who proudly showed her super hairy legs on the red carpet and revealed on Barbara Walter’s annual Oscar Special that she feels so comfortable with her unshaven legs that they’ve never been an issue. Actually, her husband “loves the hairy legs, and if Sid likes the hairy legs, there you go.”

Other celebrities who have been photographed with hair on their legs or underarms are Beyonce, Julia Roberts, Alicia Keys, Celine Dion, Juliette Lewis and Drew Barrymore, who warned that waxing is not only painful, but could damage the mammary glands, according to her gynecologist.

The prejudices against women who don’t wax

Waxing hurts and requires a lot of time and attention. Furthermore, it is not natural, but a practice that became widespread throughout the 20th Century, at the same time that women’s fashion began to show more flesh. It’s just a cultural habit. Shouldn’t the origin of its popularity be grounds enough to make it an option, not an obligation? As Paloma Goñi says, “Teenage girls, when they start to grow hair, need to know that they can chose, that they decide if they want to shave or not.”

And yet, women’s body hair is still a real taboo that makes many of us feel very uncomfortable. While The New York Times headlined an article Unshaven Women: Free Spirits or Unkempt?, comments on celebs who don’t shave say things like “we saw hairy legs, armpits with several days of neglect, and even a pubis that seemed masculine” or “I would not do it even if Brad Pitt asked me.”

Paloma Goni admits she may give in to social pressure

To prove how rooted prejudice against female body hair is, Paloma Goñi cites a study by Professor Breanne Fahs, expert in Women and Gender Studies at Arizona State University, who conducted an experiment asking her students to stop shaving for 10 weeks. Most of them were accused of being lesbians, while some of the girls’ mothers asked them if they wanted to become men. They were also threatened with the notion that they would not find a partner because their hairy legs and underarms were”gross”.

Goñi concludes her article confessing she’s not sure if she will keep natural all summer, but admits that if she gives up, it will be due to social pressure.

In any case, the Spanish journalist is a brave woman able to challenge one of the most entrenched taboos about how it should be to be a woman. We admire her courage and ambition!

Paloma Corredor is a Spanish writer and journalist in print & online media. She’s the author of the novel ‘Yo y tú y todas las demás’ and writes about feelings, personal growth & dating in many magazines. She has a passion for human emotions, behavior & relationships.