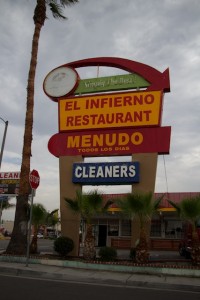 I was in Compton earlier today and came upon this restaurant on Long Beach Boulevard.

El Infierno Restaurant (English: Hell Restaurant), known for its excellent menudo, was named thus by its owner, a fellow named Andres, who comes from Apatzingan in the state of Michoacan, Mexico.

Apatzingan, you may know, is in a ferociously hot part of Mexico known as the Tierra Caliente, and known for its wild ways. Frankly, I was always afraid to visit and never did.

Andres said he named it for the heat of his native region, though Apatzingan lately has become a virtual war zone, as cartels fight each other and the military.

Anyway, El Infierno Restaurant has had some tumultuous times itself.

When it was in its original spot, in a strip mall elsewhere in Compton, it was burned down during the riots of 1992. Andres rebuilt. Then earlier this year, his restaurant was shot up and then someone crashed a car into it, gutting it with fire (see photo, right).

Andres blamed gang members who wanted to sell drugs and didn’t like his surveillance cameras (there to protect his business). A neighboring business owner said he didn’t treat customers well and some got mad. That seems hard to believe, but whatever the case, Andres moved to the newer, bigger, better location on Long Beach, which he shares with a cleaners. (See photo above)

(Reminds me of the time when, from a bus, I spotted a taqueria in Los Mochis, Sinaloa — Tacos Hitler — no lie).

The stories you hear in L.A. if you stop and ask….