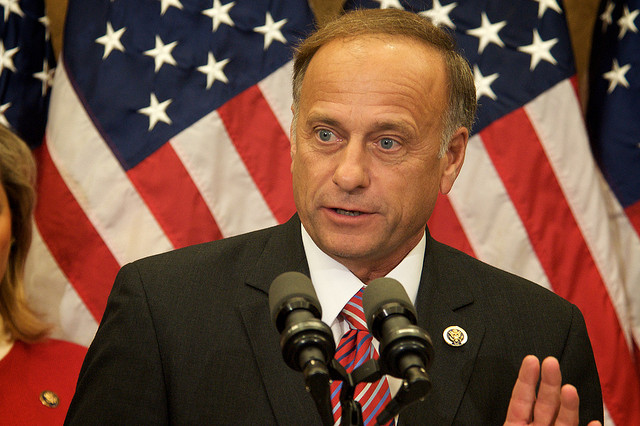 House Speaker John Boehner and Virginia Congressman Eric Cantor denounced controversial remarks from King on young undocumented immigrants in which he compared Dreamers  to drug mules. Boehner (R-Ohio) said in a statement late Tuesday afternoon that the comments from King were “hateful.”

“What he said is wrong,” he said. “There can be honest disagreements without using hateful language. Everyone needs to remember that.”

In an interview with the conservative web site Newsmax, King expressed skepticism about providing a path to citizenship for DREAMers, saying not all of them are valedictorians.

“For everyone who’s a valedictorian, there’s another 100 out there that weigh 130 pounds and they’ve got calves the size of cantaloupes because they’re hauling 75 pounds of marijuana across the desert,” King added. “Those people would be legalized with the same act.”

”I strongly disagree with his characterization of the children of immigrants and find the comments inexcusable,” Cantor said. The Virginia Congressman is working on a Republican version of the DREAM Act that would grant citizenship to young undocumented immigrants.

Despite the backlash from members of his own party, King didn’t back down Wednesday morning. Speaking to Radio Iowa’s O. Kay Henderson, he defended his remarks.

“It’s not something that I’m making up,” he said. “This is real. We have people that are mules, that are drug mules, that are hauling drugs across the border and you can tell by their physical characteristics what they’ve been doing for months, going through the desert with 75 pounds of drugs on their back and if those who advocate for the DREAM Act, if they choose to characterize this about valedictorians, I gave them a different image that we need to be thinking about because we just simply can’t be passing legislation looking only at one component of what would be millions of people.”

Some think King’s polarizing comments may end up doing more to hurt his anti-immigration reform cause, and perhaps even push leaders who are on the fence about immigration reform toward a compromise. Speaker Boehner, for example, has stayed away from taking a stance on a path to citizenship. Just earlier this week on CBS’ “Face the Nation,” he declined to get specific on his personal immigration views.

But Latino Decisions political scientist Sylvia Manzano says that the comments may indeed push Republican leaders to support reform- if they are taking into account Latino voters.

“Comments like these do not help the party from the perspective of Latino voters,” she says. “The last study that we did shows that the majority of Latinos believe comments like these(King’s) reflect the sentiments of most Republicans in Congress. In that respect its damaging to all of them- if they care what Latinos think of them.”

According to a recent Latino Decisions poll, 66 percent of Latino voters said anti-immigrant quotes represent “many Republicans in Congress” compared to just 27 percent who said they represent only a few isolated individuals. After hearing a few quotes against immigration reform, only 29 percent of Latinos felt the Republican Party “respects the Latino community” while 67 percent said they did not.

“This is not a policy discussion, it’s a series of hateful, isolating, and disparaging remarks,” Manzano says.

Though King’s comments were made last week, they were thrust into the public spotlight at a House Judiciary Committee meeting on Tuesday focused on examining the issue of legalization for DREAMers. Democrats also slammed the Iowa Republican. At the House hearing, Rep. Joe Garcia called the comments “beneath the dignity of this body and this country.”

This article was first published on NBCLatino.

Jacquellena Carrero is a multimedia journalist with a passion for writing and working behind the camera. Jacquellena is proud of her Puerto Rican roots and hopes to get more stories on Latinos into the mainstream news media. She graduated from Columbia University with a degree in Political Science in Spring 2013.