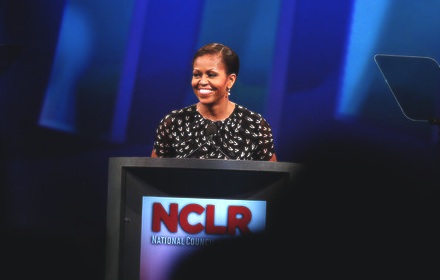 At the annual conference of the National Council of La Raza on Tuesday, First Lady Michelle Obama took the opportunity to discuss immigration and childhood obesity — an issue that affects the Latino community greatly.

“Forty percent of Hispanic children are overweight and 50 percent are on track to develop diabetes,” the first lady said. “While food might be love, the truth is we are loving ourselves and our kids to death. We need to step up, we need to start questioning the behaviors and beliefs that are making our kids sick.”

In President Obama’s second term, the first lady initiated her “Let’s Move” campaign to focus on the childhood obesity epidemic in America and find ways to educate parents to help them and their kids lead a healthier life. Despite the recent drop in childhood obesity rates in cities and states across the country, Latino obesity rates are higher than rates for non-Latinos, according to the Office of Minority Health.

In her speech, the first lady urged the audience to start holding big companies responsible for how they advertise unhealthy foods to Latino children. A new study titled “Food Marketing to Children on U.S. Spanish-Language Television,” revealed that Spanish television programming for children has more junk-food ads than the same type of shows in English.