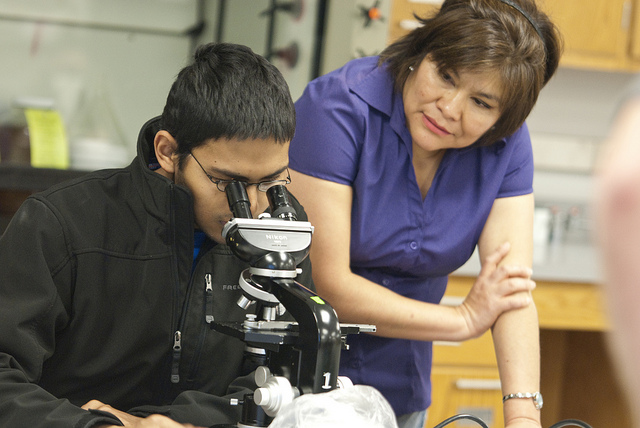 Like any mother raising two young children, much of my attention is focused on their education with an eye toward their futures and the opportunities they will have as adults in the workforce. For kids, grade school is the time for fun. But, like it or not, even at early ages schools and parents are also helping to shape whether our children will have an interest in the critical areas of math and science. This focus and this challenge for parents and educators should be at the forefront of most of our  minds as we seek to ensure our kids have access to education strong enough to prepare them for top jobs as tomorrow’s computer programmers, scientists, inventors, engineers or astronauts.

Considering the state of education in science, technology, engineering, mathematics (STEM) and computer science today, we have our work cut out for us. According to the College Board, only 19 percent of 2010 high school graduates who took the Computer Science AP exam were female. Also, according to White House statistics, more than 40% of Hispanic/Latino and American Indian students who are interested in STEM fields are within four points of the cutoff number for math proficiency on the ACT exam.

The challenge we face has my attention as a parent, and I’m glad it also has struck a chord in Congress. The bipartisan immigration reform legislation passed last month by the U.S. Senate includes a national fund for states to dedicate to enhancing their STEM education programs.

The widespread support for the fund is undoubtedly based on an understanding that STEM jobs are the future of America’s economy. Occupations in STEM fields are the second-fastest growing in the nation, just behind health care, according to a Georgetown University study. And while 8.6 million STEM related jobs are expected to be available in 2018, as many as three million of those jobs might be unfilled, according to the National Math and Science Initiative. The STEM fund can play a crucial role in addressing this disparity and in ensuring that more women and minorities are represented in these fields.

Latinos are the fastest growing segment of the U.S. population and workforce, projected to total 25% of the U.S. population by the middle of the 21st century, yet the Hispanic share of the STEM workforce increased by only one percentage point from 2000-2009, according to the U.S. Department Of Commerce’ Economics And Statistics Administration. If the percentage of Latinos in the workforce is increasing, the percentage of Latinos in STEM fields should also be increasing. Luckily, the immigration legislation can help fix this dismal discrepancy.

The immigration bill would reform our nation’s high-skilled immigration program and make a significant investment in STEM and computer science education in communities in every corner of the nation. A greater investment in STEM education will ensure the U.S. has the future innovators and entrepreneurs America needs to match global competitors. If given the chance and the investment, our children and students are more than capable of creating the next generation of technology or exploration in outer space.

The national STEM fund would be created by a new fee on employers in the U.S. who hire foreign workers for currently unfilled high-skilled jobs. This fund would also improve training for students in STEM fields and provide additional money to strengthen STEM education to prepare students for high-skill positions.  This is a crucial investment as many states have cut education spending in recent years.  By expanding opportunities in the states, the effect of the STEM fund will be to reach more Latino students and encourage more to earn their degrees in these fields.

Fortunately both parties in Congress have recognized the need for improvement in STEM education in the U.S.  The kind of economy the nation will have in the future depends upon the passage of this bill. And our voices, as Latinas and as mothers, are powerful in this debate. This impact of this legislation stretches much further than immigration; it reaches all the way into the futures of our children.