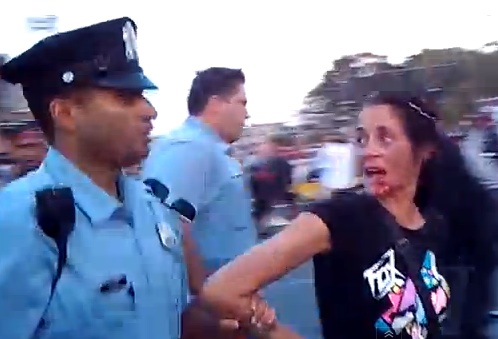 A report out of Philadelphia revealed today that Judge Patrick Dugan, who believed a viral video showing former city police lieutenant Jonathan Josey punching Aida Guzmán last fall after the city’s Puerto Rican Parade was sensationalized by the media and who this week presided over Josey’s not guilty verdict for simple assault against Guzmán, is married to a Philadelphia police officer. According to Philly.com, “a chorus of criticism swelled Wednesday after word spread that Dugan is married to Philadelphia Police Officer Nancy Farrell Dugan, who has been on the force since 1997, city payroll records show.” 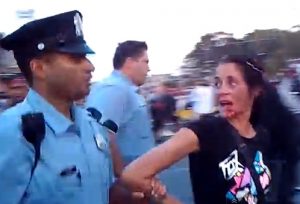 The story published reaction from the city’s Puerto Rican community:

Some members of the city’s Puerto Rican community who denounced Dugan’s acquittal of Josey were bristling over the revelation about his wife.

“It’s ridiculous. His wife is a police officer, and I understand he was endorsed by the FOP [Fraternal Order of Police],” said Quetcy Lozada, president of the Philadelphia chapter of the National Conference of Puerto Rican Women.

“We’re all human beings,” Lozada said. “There is no possible way that a judge put in a situation like that will be able to make an unbiased decision.”

Guzman’s attorney, Enrique Latoison, said he learned Tuesday that the judge is married to a cop.

“When it was brought to my attention that his wife was a police officer, it was very surprising and I consider it to be a conflict of interest,” said Latoison, who has asked the U.S. Department of Justice to investigate the case and intends to file a civil suit against Josey on behalf of Guzman.

When asked about whether this was a conflict of interest, the Philly.com story said that Dugan “appeared pained Wednesday and paused in a courthouse hallway only long enough to say that the Code of Judicial Conduct constrained him from answering questions.”

The story also included opinions from local legal experts, who all agree that Dugan should have recused himself.

Frank M. McClellan, professor of law emeritus at Temple University’s Beasley School of Law, said the standard for a judge to recuse himself is if he has a personal interest in a case that would prevent him from being impartial, or if his presiding would create an appearance of impropriety.

“It certainly would have been appropriate, even if not required,” for Dugan to recuse himself, said McClellan, who teaches legal ethics and malpractice law. “We want to give the public confidence that there has been a fair and impartial decision made.”

Lynn A. Marks, executive director of Pennsylvanians for Modern Courts, a nonpartisan reform organization, said that although Dugan was not required to recuse himself, maybe he should have.

“Given the fact that this had the potential of being a high-profile case, it would have been wise to [step aside] so that people would not question his decision,” she said.

Marks, a lawyer, said that “at the least he should have disclosed to the attorneys that his wife is a police officer so they could decide if they wanted to bring a motion to recuse.”

According to the story, the city’s District Attorney did not know that Dugan was married to a cop and the spokesperson did not want to answer whether the DA would have asked Dugan to step down from the case. The story also said that it tried to reach Josey’s attorney on Wednesday, but that they could not reach him for comment.