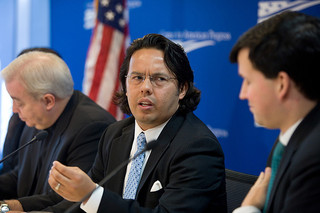 Is the new voice of civil rights for US Latinos here? Maybe so, if you listen to what the Rev. Sam Rodríguez, the the fortysomething evangelical president of the National Hispanic Christian Leadership Conference (NHCLC), has to say. This year Rodríguez, who is 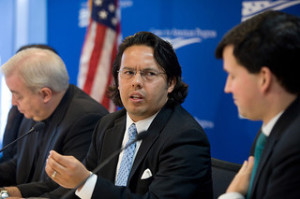 of Puerto Rican descent, will be “the first Latino leader to give a keynote address at Dr. King’s annual commemorative service scheduled for Monday, January, 21.”According to NBC Latino, “the event also marks the beginning of a year-long celebration honoring the 50th anniversary of his unforgettable ‘I Have a Dream’ speech.” By the way, according to the article, Rodríguez turned down an invitation to speak at President Obama’s inauguration because of his commitment to the King memorial.

If the following video is any indication of that the Rev. Rodríguez will speak about on January 21, this year should be memorable. You would think other Latino leaders would follow Rodríguez’s lead. Talk about fiery rhetoric.

But hey, we have known about the Rev. Sam for a while now, especially when he was unfairly criticized by the ignorant Tequila Party for not being qualified to talk about immigration because he was Puerto Rican. And during the early days of the GOP primaries in 2011, Rodríguez led the way in telling politicians that theanti-immigrant rhetoric just needs to stop. Recently, Rodríguez and other Latino evangelical leaders are pushing for comprehensive immigration reform, taking their message to the pulpit in the “I Was a Stranger” campaign.
Now we are not saying that everything Rodríguez says is spot on. There are still issues surrounding his views on gay marriage, for example. But it is clear that Rev. Sam is promoting brown/black unity and a belief that immigration is a civil rights issue.

[Photo by  Center for American Progress]