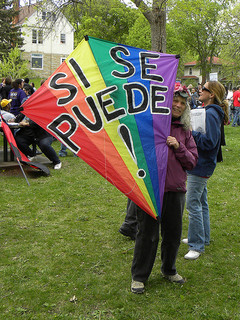 A letter signed by more than 50 gay rights and immigration advocacy groups was sent to the White House on Monday asking President Obama to hold immigration cases involving Americans seeking legal residency visas for their same-sex partners until the Supreme Court issues a decision on gay marriage next year.

These gay rights and immigrant advocacy groups want to change a ruling passed under the Defense of Marriage Act (DOMA), where same-sex marriage cannot be a valid basis for federal benefits. Under DOMA, an American who marries an immigrant of the opposite sex can obtain a green card.

“For me, it’s been easy. I can go wherever I want, I can travel, and Pablo has been there for me. Pablo doesn’t have his papers and it’s unfair,” says Santiago Ortiz of New York, who is still waiting to assist his partner, Pablo Garcia from Venezuela, to obtain a visa.

Upon hearing that the Supreme Court agreed last Friday to take two cases challenging laws that define marriage as being only between a man and a woman, these gay and immigration organizations joined forces to work off the momentum they gained from November’s elections, where gay, Latino, and immigration voters turned out in large numbers for President Obama.

“The timeline is really dramatically speeded [sic] up by the attention to immigration reform that came out of the election, as well as state ballot initiatives in favor of LGBT rights,” says Rachel B. Tiven, Executive Director of Immigration Equality. “We’re seeing an enormous amount of energy on the Hill and a lot of optimism.”