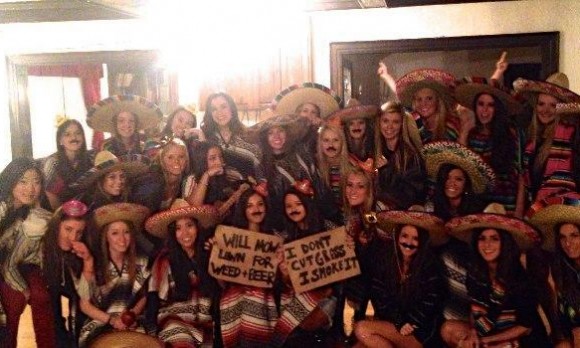 Looks like Halloween 2012 was the year of sorority sisters dressing up in racist Mexican costumes with sombreros, sarapes, mustaches, black shoe polish, and signs that say “Green Card,” “I don’t cut grass, I smoke it,” and “Will mow lawn for weed and beer.” Just as we were starting to file away a story from Baylor University involving the many of the aforementioned items (plus your very own border fence!), a story out of Penn State says that the college’s chapter of Chi Omega sorority is now being investigated for the following photo, which appeared on Tumblr: 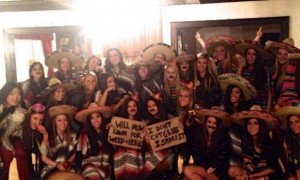 Due to the discovery of an “offensive” photo by the Penn State Panhellenic Council, one sorority at Penn State is under investigation by the PHC’s executive board, according to a statement released by the board.

Jessica Riccardi, the president of the Nu Gamma chapter of Chi Omega, confirmed that her sorority under investigation by releasing an apology.

“Our chapter of Chi Omega sincerely apologizes for portraying inappropriate and untrue stereotypes. The picture in question does not support any of Chi Omega’s values or reflect what the organization aspires to be,” Riccardi (junior-marketing) said.

The Panhellic Council said the following in a statement, according to OnwardState.com:

“The Penn State Panhellenic Council recognizes the offensive nature of the photo and is therefore taking the matter very seriously. We are addressing the situation immediately with the members of the chapter in conjunction with their national headquarters. The Penn State Panhellenic Council does not condone any form of derogatory behavior from any of our members. Our Council and all its members strive to hold ourselves to a high standard and are disappointed by any failure to meet these expectations.”

The Mexican American Student Association is disappointed in the attire chosen by this sorority. It in no way represents our culture. Not only have they chosen to stereotype our culture with serapes and sombreros, but the insinuation about drug usage makes this image more offensive. Our country is plagued by a drug war that has led to the death of an estimated 50,000 people, which is nothing to be joked about.