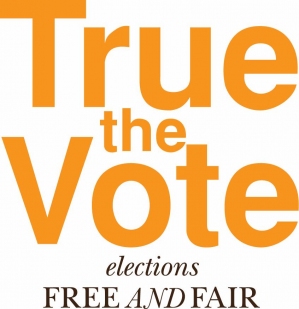 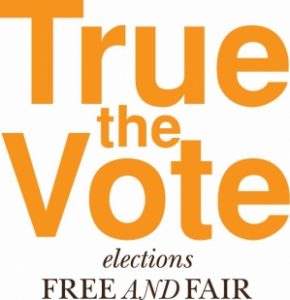 WASHINGTON, Nov. 1, 2012 /PRNewswire-USNewswire/ — The following is being released by Velasquez & Associates on behalf of the undersigned organizations:

An alliance of 21 civil rights, human rights and labor organizations, including the NAACP, the Hispanic Federation and the AFL-CIO, today urged True the Vote and its affiliates to halt immediately its national campaign to assert challenges to the eligibility of voters.

True the Vote, a Texas-based organization, has announced plans to place a million poll watchers around the country, reportedly targeting minority groups and other demographic groups traditionally under-represented in our democracy. The 21 organizations wrote True the Vote President Catherine Engelbrecht to urge her to dismantle the program, which they called “a sad revival of racially targeted voter suppression that America left behind decades ago.”

“We will not go back,” the organizations wrote. “Generations of Americans have fought and died to secure the right to vote, and costly battles have been waged in the streets, in the courts, and in our legislatures to protect Americans from intimidation and harassment at the polls.”

For a copy of the letter, email nick@allyconnections.com.

We are writing to urge True the Vote and its affiliates (collectively referred to as “True the Vote”) to halt immediately its campaign of intimidation and harassment, which targets voters of color and has already tainted the 2012 election. We believe your organization is engaged in a national, multi-pronged attempt to deter participation in the electoral process by minority voters and other demographic groups that are traditionally under-represented in the electorate.

The right to vote is the most precious right of every American citizen, and the bedrock principle of our democracy. Throughout American history, however, low-income and minority Americans have often been met with suppressive tactics from those who would keep the electorate as white and wealthy as possible. After the civil war, residency requirements, poll taxes, and literacy tests were specifically designed to disqualify newly freed African-Americans and lower-income workers. As late as the 1960s, overt violence, intimidation, and “Jim Crow” laws remained the popular methods to silence minority voices at the polls.

We will not go back. Generations of Americans have fought and died to secure the right to vote, and costly battles have been waged in the streets, in the courts, and in our legislatures to protect Americans from intimidation and harassment at the polls. The wide-scale challenge program you propose is a sad revival of racially targeted voter suppression that America left behind decades ago.

True the Vote has announced its intention to have volunteers assert challenges to the eligibility of voters across the country during the upcoming election period. Your organization should be advised that state and federal laws prohibit the harassment and intimidation of voters that will foreseeably result from your program. As Representative Elijah Cummings advised in his October 4, 2012 letter to you concerning the House Committee on Oversight and Government Reform’s investigation of True the Vote, intentional acts of intimidation may warrant criminal prosecution.

A challenger who intimidates or attempts to intimidate, threaten, or coerce a prospective voter who is attempting exercising the right to vote violates Section 131 of the Civil Rights Act of 1957[1] and Section 11(b) of the Voting Rights Act.[2]  If that challenge is undertaken pursuant to an agreement with another person, it violates 18 U.S.C. Section 241,[3] regardless of whether it actually causes a person’s right to vote to be lost.[4]

In numerous states across the country, representatives of True the Vote may have already flouted federal voting laws by asserting pre-election challenges to thousands of legitimate voters based on inaccurate, legally insignificant, and misleading information.  The organization created a national training network instructing recruits to use the internet to identify voters they would challenge based on irrelevant factors likely to net a disproportionate percentage of minorities, youth or elderly voters. In Ohio, representatives of the local affiliate, Voter Integrity Project, have challenged at least 1,200 voters in 12 counties, using True the Vote software that flags voters who, for example, live in residences that house six or more registered voters.[5] In Hamilton and Franklin Counties, representatives asserted over seven hundred faulty challenges based on voters’ residency, which were rejected.[6]

The advent of early voting and Election Day signals the culmination of True the Vote’s plan to recruit, train and place a million volunteer poll workers or poll watchers around the country to challenge voters.  In at least four states, Colorado, Ohio, New Mexico and Wisconsin, True the Vote trained volunteers by misrepresenting applicable law so it appeared to impose greater restrictions on voters than it actually does.  This aggressive challenge program will likely deprive thousands of eligible voters of the right to cast a ballot that counts and escalate into behavior that violates federal and state laws.  We saw precisely such behavior in Harris County, Texas during the 2010 general election, when recruits from King Street Patriots, an arm of True the Vote, descended on largely African American precincts using loud, confrontational and, in some cases, physically intimidating tactics to deter voting.

In order to avoid recurrence of this disgraceful episode, we urge True the Vote to dismantle its challenge program and comply with federal and state law. We, and other civil and voting rights groups, will be monitoring the polls on Election Day to ensure that no one interferes with the right of each voter to cast his or her ballot in a safe and orderly atmosphere, free from intimidation and fear.

American Federation of Labor and