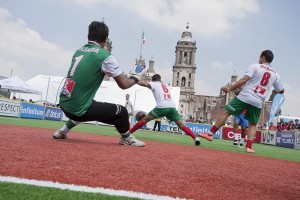 Great idea — forming soccer teams made up of folks who are homeless, or socially/economically marginalized, and bringing them all together to compete in a soccer tournament, this the 10th annual.

On Facebook, Keith writes of some of the people he met:

“Like Ikram Moukhlis, a young Muslim woman who lives in a women’s shelter in Tangiers, Morocco. I know about 5 phrases in Arabic, she speaks no English or Spanish, but somehow we connected and I was proud of the photos I made of her. This trip to Mexico was the first time in her life to be on a plane. And then, Mauva Hunte-Bowlby, playing for England, who has been, until just recently, ‘sofa-surfing’ in London. Ms. Hunte-Bowlby is 52, and a grandmother twice over.”