This will lead to some interesting discussion about self-identity and heritage. Of course, it is Hispanic Heritage Month and everyone and their mother are promoting the worthy contributions of notable Latinos/Hispanics. We aren’t big fans of HHM because in the end, for us, every day is HHM. However, we do think that some HHM efforts are actually spot on excellent (check out NBC Latino’s #latinoinnovators and Pa’lante Latino’s “¿Sabías qué?“, for example) and we give some kudos to Major League Baseball for getting in on the HHM action.

On September 25, MLB released its “All-Time Latino” team. Here is the list of players: 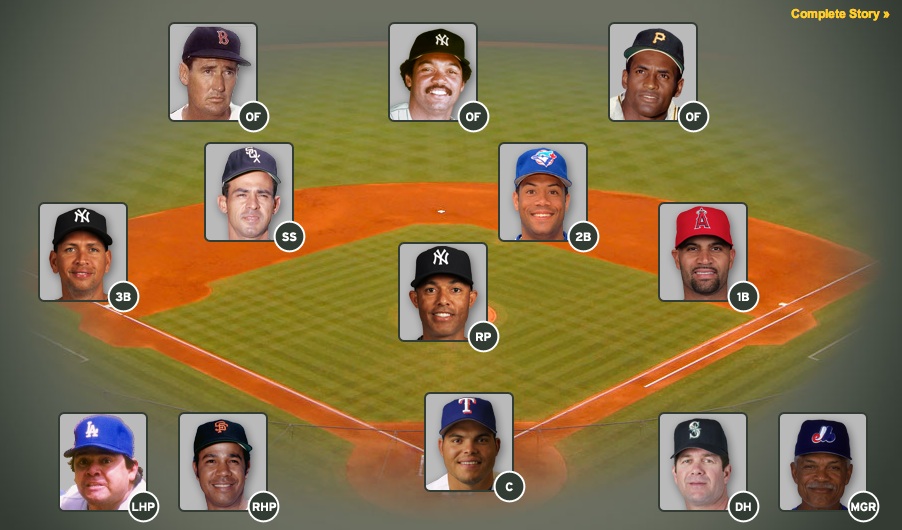 Wait, you might ask? Williams and Jackson? Yes, Williams’ mom was Mexican and Reggie’s grandma was Puerto Rican. The fact that MLB is counting both Hall of Fame players on the list is interesting. We are sure that some of our readers would welcome the choices while others would scratch their heads. And that is the point about all this.

The issues of self-identity and what is it to be Latino in the 21st century are constantly being challenged. And we think that is a good thing. A very good thing.

Williams played in a different time, when baseball was still not fully integrated. We just wonder that if Williams played up his Mexican roots, would his talent overcome that? He was the greatest hitter to ever play the game. It might seem odd that his name is in the same outfield as Clemente, who perhaps is the greatest Latino ballplayer ever, the one player that many Latinos identity with. Yet, Clemente played in a different era, from the latest 50s to the early 70s, when issues of race, heritage, and culture were becoming a bigger part of the national dialogue.

The way we look at it? We like to remind people one in a while that one of baseball’s greatest stars had some Mexican blood in him. That is cool. Very cool.

As for Reggie? Those who were in the know in the 70s always loved to say “Reginald Martínez Jackson,” knowing all along that Reggie was a boricua. Reggie had the swagger and the flash. When he hit homers, he HIT homers. And when he struck out, he STRUCK OUT. Feast of famine with Reggie, and yes, he was Latino.

So kudos to the MLB list. The final choices were not just presenting a list of Latinos who came from the Caribbean and Latin America. It truly is a list that reflects our diversity and the fact that yup, Latinos are not a monolithic bunch. We will always be proud of Clemente, as well as Williams, Jackson, and others.

By the way, the honorable mention list is a veritable who’s who of Latino baseball greats. (Although, really, no Nomar Garciaparra but yes to José Reyes? Really? No NOMAH?)