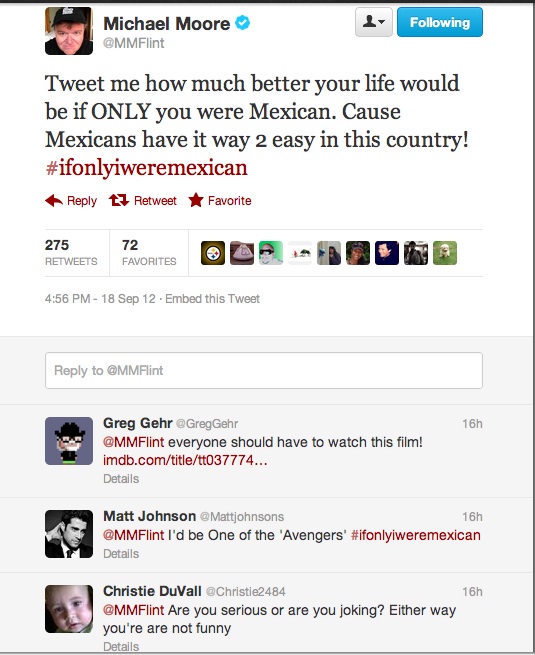 Now that Mother Jones has released the entire video of the Romney fundraiser that has gone viral all over the Internet, the social media reaction has been intense, to say the least. Romney’s comments and weak-ass joke just confirmed how out of touch he is with Latino voters and why he is lagging behind President Obama in current polls by a very wide margin.

It is in this context that Moore’s Twitter profile posted the #IfOnlyIWereMexican hashtag. Now, Moore is trying to be cute and witty. In the end, some of the responses he has gotten from people just show how ignorant and racist people are about Mexicans in particular and Latinos in general. The following Storify presents several examples of tweets and responses that quite frankly are offensive, insulting and just in poor taste. Memo to everyone out there, especially to those “progressives” who think that they are helping the cause: leave the wit and self-deprecating humor to the experts, like @MexicanMitt. When you start tweeting things that associate being Mexican to mowing laws, working as day laborers, eating cheap rice and frijoles, and (the worst one we saw by far) being in fear of the Zetas, you just add to the ignorance. And please please don’t tell us that “you have Mexican friends.” If you were truly concerned, you would have tweeted a huge #NoMames to Moore immediately. (Looks like Twitchy was on the case as well.)

Here is a stream of some of the tweets that are out there now. Good for those Twitter profiles that called Moore out about his silly and racist idea.

This story was first published in Latino Rebels.