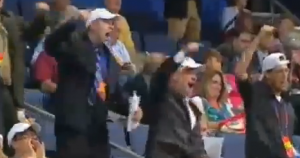 Here’s another commentary about what Republicans need to do to earn any kind of decent percentage of the Latino vote in November. (I’ve read several of these now.)

Polls I’ve heard have Romney getting 28 percent of Latino vote. This story says 26 percent, less than John McCain polled in 2008. Romney met with a Latino coalition the day after his wife spoke, according to La Opinion, hoping to cultivate some better feelings.

Yet all this will be hard to accomplish. The R leaders may want to de-emphasize the strident rhetoric, but Rs on the ground don’t seem willing to go along.

To wit: A Puerto Rican delegate to the RNC was shouted down with chants of “U-S-A” when she began to speak in her accented English. (See video above)

PBS’s Ray Suarez provides some context to the event, which explain it as something other than what the video makes it appear, though this may not make it more palatable to Latinos.

And of course, the peanut incident — where delegates threw peanuts at a black CNN camerawoman saying, “this is how we feed animals” isn’t probably going to help much, either.