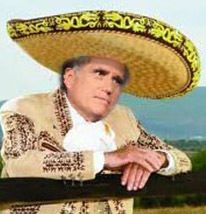 Last night @MexicanMitt, Twitter’s #1 political parody account (according to Politico) was suspended by Twitter a few hours before the real Mitt Romney

was to give his acceptance speech at the Republican National Convention in Tampa. After confirming the news with our friends at Pocho.com, we shared the news, and it also made NBC Latino. The hashtag #FreeMexicanMitt  went into action last night around 10pm EST. Our favorite one came from nationally syndicated columnist Esther J. Cepeda, whose tweet accurately reflected what many were feeling about Twitter’s ban (on the same night Romney-Ryan 2012 paid $120,000 to promote its own trending topic): Even after the profile was back up, Mexican Mitt had to start all over again, change his profile name to “Mexican Mitt Parody,” and have people refollow the account of “The Most Mexican Man in the World.” As of this morning, all is back to normal and the parody account is back up to over 7,400 followers: We are glad it is. Mexican Mitt, who parodies the real Romney’s father birth in Mexico, is what makes Twitter a daily roller-coaster adventure. Come on, how can Twitter think of  banning brilliance like this?