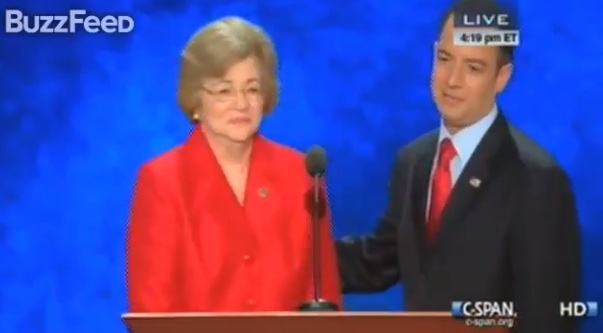 Now there are conflicting stories, one saying that the boos and chants  of “USA! USA!” by some Republican delegates today in Tampa were all about trying to seat some Ron Paul delegates after RNC chair Reince Preibus had called for a vote to unseat them.

However, whether it was irony or just plain ignoranace, all this chanting was happening as Puerto Rico’s Zoraida Fonalledas,  Chairwoman of the Committee on Permanent Organization, was approaching the podium. UnivisionNews reported that Paul’s supporters were told to chant “USA” to drown out speakers. One Fox News Latino reporter called the scene “just a little bit awkward.”

Here is the video:

In the meantime, social media in Puerto Rico has been lighting up since this occurred, with some local outlets reporting that the delegates screamed “Get her out! USA!” Puerto Rico’s largest newspaper reported that Paul supporters were drowning out Fonalledas because of the Paul snub by the RNC, although the end of the video clip got uncomfortable to say the least. And The Washington Post’s Dana Millbank weighed in on the messiness of it all. Puerto Rico is a commonwealth of the United States and although its residents are US citizens, the island is not a state of the Union. Who knows why the delegates were still screaming wheb Fonalledes was about to speak, but it definitely didn’t look good and proves once again that some Americans just don’t get it.

Here is one report from Harper’s that gives the moment a bit more context:

An unscripted moment happened late this afternoon that caused the assembled mainstream media to turn away in the hope that it would disappear. As I was standing in line for a sandwich next to an Italian and a Puerto Rican correspondent, a controversy was unfolding on the floor. The RonPaulites, whose furious devotion to a single idea have made them the Ellen Jamesians of the right, were protesting a decision by RNC officials not to seat members of the Maine delegation, which was split between Paul and Romney supporters following rule changes made just prior to the convention. There were energetic shouts of “Aye!” and “Nay!” as a Puerto Rican party functionary—Zoraida Fonalledas, the chairwoman of the Committee on Permanent Organization—took her turn at the main-stage lectern. As she began speaking in her accented English, some in the crowd started shouting “U.S.A.! U.S.A.!”

The chanting carried on for nearly a minute while most of the other delegates and the media stood by in stunned silence. The Puerto Rican correspondent turned to me and asked, “Is this happening?” I said I honestly didn’t know what was happening—it was astonishing to see all the brittle work of narrative construction that is a modern political convention suddenly crack before our eyes. None of us could quite believe what we were seeing: A sea of twentysomething bowties and cowboy hats morphing into frat bros apparently shrieking over (or at) a Latina. RNC chairman Reince Priebus quickly stepped up and asked for order and respect for the speaker, suggesting that, yeah, what we had just seen might well have been an ugly outburst of nativism.

So yes, a Puerto Rican GOP delegate was interrupted at the podium. Was it because she was Puerto Rican? No. But did it look good for the GOP? No. Anything that distracts people from the message is never a good thing.

UPDATE, August 29, 9:15 am: Bryan Llenas of Fox News Latino reported the following statement by the RNC:

During today’s Republican Convention Committee Reports, the Ron Paul followers exercised their right to free speech and protested the report by the Committee on Credentials. The Report by the Chairwoman of the Permanent Organization Committee followed. The protesters continued their boisterous protest of the Credentials Report which spilled over to the rest of the proceedings. To be clear, the attempt to disrupt the proceedings had to do with the report, not the Puerto Rico National Committeewoman. Puerto Rico and its delegation play a very important role in this Convention, and are an integral partner in the National Committee.