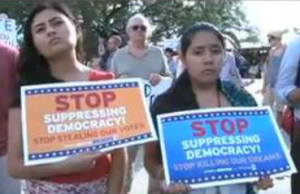 Republican presidential nominee has for weeks been dodging the question of whether he would repeal the Obama administration’s deferred action program that allows up to 1.7 million undocumented young immigrants to stay and work in the U.S.

Looking to get an answer from him once and for all, dozens of dreamers marched to the Republican National Convention Tuesday. They told VOXXI they fear that if elected, Romney would repeal the federal program.

Their fear stems from Romney’s promise to veto the DREAM Act if he’s elected president.

The dreamers also condemned the Republican Party for adopting “an inflexible anti-immigrant and anti-Latino platform” that calls for doing away with in-state tuition for undocumented students, the implementation of a national employment verification program and a fence across the U.S.-Mexico border.

Political analysts told VOXXI they don’t expect dreamers will play a major role in the convention saying they are not a priority for the GOP. Neither do they expect Romney to address his stance on deferred action.

Griselda Nevárez is a reporter with Hispanic Link News Service in Washington D.C.