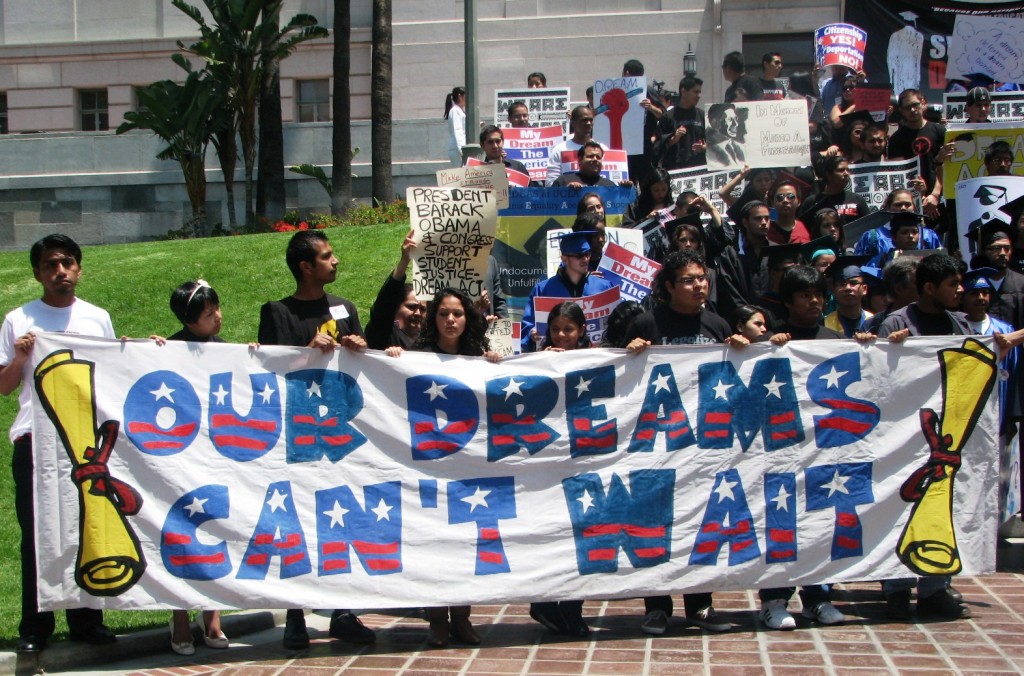 Today, the United States government initiates a deferred action process providing temporary relief from possible deportation to young people “who were brought into this country through not fault of their own.” The June 15 executive action announced by President Obama, which was praised immigration advocates but also seen a sly and cynical election year move, could eventually benefit an estimated 1.7 million people under 30 years old who have been living in an undocumented limbo.

Immigration advocacy groups have been sharing deferred action FAQS and information to the public. Coverage about this announcement has been steady, and for many of those you have been fighting for a significant change in this country’s immigration system, there is cause to reflect and celebrate. 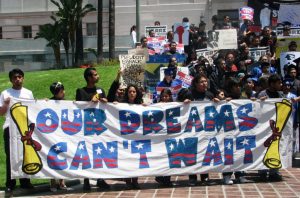 However, the US government and the Obama administration are still sending mixed messages that confirm that even with the deferred action decision, there is still more work to be done.

Take the example of Sergio García, an 35-year-old undocumented man who was recently denied by the US Justice Department a chance to practice law in California. As the LA Times reported:

In a brief to the California Supreme Court, the U.S. Department of Justice said federal law prohibits giving a public benefit, such as a bar license, to an “unlawfully present alien.”

The federal law was “plainly designed to preclude undocumented aliens from receiving commercial and professional licenses issued by states and the federal government,” a lawyer for the Justice Department wrote in a brief requested by the state high court. T

he Justice Department’s position surprised and dismayed some supporters of Sergio C. Garcia, 35, the immigrant who has passed the bar examination but cannot be licensed unless the state’s highest court approves.

In a long line of friend-of-the court briefs, only the federal government and a former state bar prosecutor have opposed Garcia’s licensing.

What must be noted about García is that after his father became a US citizen, he sponsored his son for a green card and permanent status. That was 18 years ago, and according the Times, “the application is still pending.”

García is one of many current stories that continue to expose the flaws of this country’s immigration system. In Sacramento, for example, there is the story of the “tamale lady” out of Sacramento that we shared with out Facebook community in late July.

The story appeared in several Spanish-language outlets, before getting picked up by English-language outletsas well as a Ruben Navarrette Jr. column on August 2. However, the story of Juana Reyes tended to be buried by Olympicmania. Here is what Sacramento’s newsreview.com reported on July 26:

This story of the United States’ effort to deport a south Sacramento Walmart tamale lady has blown up in the Spanish-speaking media. La Opinión recently did a feature on Reyes. And one of Univision national’s lead reporters, Luis Megid, interviewed her, too. In the Hispanic and Latino communities, Reyes has become an election-year symbol of all that’s wrong and broken with America’s immigration policy.

And outrage, it seems, is the only hope for Reyes to stay in Sacramento and not be deported. Immigration court cases can take anywhere from three to five years, says attorney Julia Vera, who adds that she has very few options in defending her client. Reyes’ best chance hinges on the concept of “prosecutorial discretion.”

Each year, ICE throws out some 4,000 cases based on certain criteria, including but not limited to whether the defendant has a clean arrest record, has been in the country for more than a decade, and also has strong family and community ties. Reyes meets all these conditions. But ICE hears millions of cases.

“Our chances of getting prosecutorial discretion are slim to none,” Julia Vera told SN&R. Other options, such as “cancellation” or “affirmative relief,” are even less probable.

Advocates and attorneys point out that, if Reyes had been arrested another time, say later this year, she’d probably be free to go under California’s TRUST Act, which recently was approved by the state Senate and likely will be inked by Gov. Brown. Written by Assemblyman Tom Ammiano, the TRUST Act is a counter to Arizona’s anti-immigration law that specifically limits local governments’ ability to hold individuals for deportation if they are not a threat to public safety.

Tamales can be hot sometimes, yes, but generally are not considered a menace to society. But it’s too soon for TRUST. And so Reyes’ best hope is in the court of public opinion.

And that the general public is increasingly outraged upon hearing her story. Law-abiding but illegal-immigrant tamale lady arrested, has kids taken away for selling tamales outside of a Sacramento Walmart—it’s a compelling narrative, and especially here in California, a state that prides itself on being a step or two more progressive than the rest of the nation. Reyes’ backers at the rally last week, including current city council candidate Rob Kerth, argued that her case is an extreme interpretation of immigration law that has no place in the Golden State. Or, as Jon Rodney with the California Immigration Policy Center announced to media and supporters last week: “I think we need to remember that we have a broken immigration system in this country.”

These two California stories both speak to the same issue:  our immigration system is broken, and because of it, many in this country are programmed to just break the system entirely and put a fence around the country (well, at least the southern party of the country). As a result, the nativist mindset continues to become more and more engrained in the minds of many.

Case in point: Samuel “Joe the Plumber” Wurzelbacher, who is running for as a Republican candidate for Congress out of Ohio, told a crowd of about 125 supporters in Arizona that the government should “put a damn fence on the border going with Mexico and start shooting.” That type of extremism just adds fuel to the ignorant fire, and we are still wondering why a candidate in an Ohio election is speaking in Arizona.

The reality is that the “Joe the Plumber” story is becoming more and more common. The issues, anger and emotions about immigration are now being tossed about everywhere. Take for example, tonight, according to local reports, the head of Charlotte-Mecklenburg’s school board is trying to stem off a push by three Republican school board members to check the immigration status of the district’s students:

CMS board Chairman Ericka Ellis-Stewart said in a statement emailed Tuesday afternoon that she is disturbed by the proposal. She noted that it asks that CMS to “quantify the financial impact on the Mecklenburg County Budget of illegal immigrants who attend CMS.” She said it also asks CMS to obtain documentation about students’ immigration status beginning with the start of the 2012 school year.

In her statement, Ellis-Stewart said what the proposal asks CMS to do is illegal. “We are barred by federal law from inquiring about the citizenship or residency status of our students,” she wrote.

She added that the proposal makes no similar request of county agencies.

In an earlier e-mail, [Republican Commissioner Bill] James had said the 1982 Supreme Court decision Plyler v. Doe may require illegal immigrant students to attend K-12 schools, but he added: “There isn’t anything that prevents us from figuring out the cost and sending a bill to the Mexican government for the education of their young.”

So to the DREAMers, we say, ¡enhorabuena! But the fight continues. Will our nation’s leaders (and this means you too, Mr. President) really try to enact more realistic and comprehensive immigration laws that take into account the real lives of real people who have been in this country for years, or will we become of country of Joe the Plumbers who want to send education bills to Mexico?

That is where we are at. And although tomorrow’s deferred action is a good first step, we are still so far away from take a huge leap into reforming this country’s immigration laws.