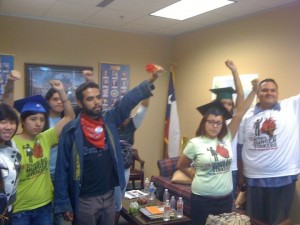 On June 15, Secretary of the Department of Homeland Security Janet Napolitano announced a new administrative policy that would prevent youth who pose no national security threat and meet other requirements to obtain a permit to remain in the country and work legally.

The guidelines for the applications that become available Wednesday, August 15 are available at the U.S. Citizenship and Immigration Services Web site.

Each year, approximately 65,000 undocumented youth graduate from U.S. high schools; they make up about 2% of graduates.  According to theImmigration Policy Center, “Approximately 1.4 million immigrants currently in the United States might meet the requirements of the deferred action initiative, either now or when they are older.”

Young people seeking deferred action are eligible if they meet all of the criteria below:

●  Came to the United States under the age of sixteen

●  Are currently in school, have graduated from high school, have obtained a GED, or are an honorably discharged veteran of the Coast Guard or Armed Forces of the United States

●  Are not above the age of thirty

This administrative policy is not a law and does not carry any permanent legal status.

If granted deferred action, youth will have the opportunity to obtain a renewable 2-year work permit, but this policy does not offer a pathway to permanent residency (green card) or citizenship.

Many of us continue to hope this will change during Obama’s second term so the full version of the DREAM Act, which will give responsible youth a path to citizenship, passes.  I trust it will.

Over the last 18 years, I’ve had many undocumented students in class who are model students, who contribute positively to our city, who work to create opportunities for themselves, and who deserve a chance to remain here–the country they consider home.

Below is an essay from one of last year’s seniors who dreams of earning a college degree.  She wrote this essay for one of the few scholarships opportunities available to her.

One Sunday after work during the spring of my senior year, I was happy to go home and see my family waiting for me to take them out. We were headed to the mall and I didn’t notice I was going over the speed limit. The police flashed the lights and I pulled over. The officer came to the window and told me that I was going ten miles over the limit. He gave me a ticket and told me to present myself in court.

I was scared at the moment because when he asked me for my I.D., I had to give him my Mexican I.D.  He was going to know right away that I was undocumented.

After that day, I had to get ready for my day in court. What was I going to say?

When I walked in the court room, I felt like an outsider. I looked at my surroundings and saw people from other races and only a couple of Mexican people. I felt scared because I felt I was going to be judged unfairly. In the end, I felt so relieved that I only had to pay a fine, but this experience changed me forever.

On so many occasions, I have felt hopeless because of the obstacles I had to face because of my status. Sometimes I even feel bad for myself; I feel that I was destined to be an immigrant that will never be like other people who succeed.

The fears that I had the day I got stopped are similar to the burden carried by all undocumented students: fears of getting arrested, deported, and, most importantly, not being able to go to college. For these reasons, the DREAM Act is the most important legislative policy that can positively affect the lives of people in this country.

The DREAM Act seeks to give undocumented students an opportunity to go to college and have a path to citizenship. As an undocumented citizen, I understand the value of being allowed to go to school so I can help myself, my family, and my community.

I have worked hard to maintain a 3.4 GPA while working almost full-time and surpassed many of my classmates who are citizens. Still, I am denied the right to a college education. Although some may consider my parents coming to the United States a violation of the law, I know they did it to give me an opportunity to become successful.

Now, if the DREAM Act is passed, my life will reach a turning point. It will encourage me to make my dreams come true without barriers—completing two years of community college and going to a four-year university. I will feel proud and fortunate of the opportunity the DREAM Act will give me and many other undocumented students who will be able to achieve their goals as well.

If awarded the scholarship, it is my parents’ sacrifices, the belief in myself, and my commitment to hard work that will allow me to complete my degree.

You will read many applications from students who need your scholarship. As the oldest of five children and the primary financial support  of my family, I not only stand in need your scholarship but I want this opportunity to show my community and the scholarship committee that investing in me proves undocumented students are worth supporting.