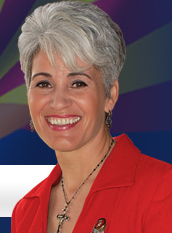 The following Facebook post from the official page of Gabriela Saucedo Mercer, a Republican candidate for Congress in Arizona’s District 7, has started to go viral and is getting mostly negative and angry attention for the following: Saucedo Mercer’s comparison of food stamp recipients to animals getting fed in the wild. Here is what her page posted: 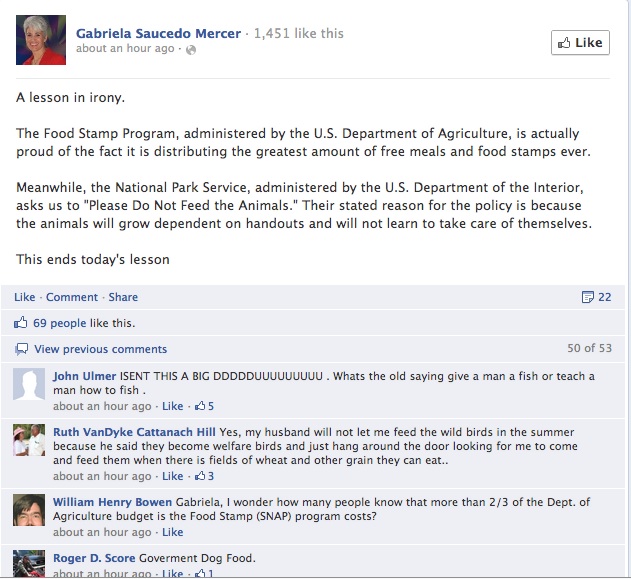 Granted, we think we know what Saucedo Mercer wanted to say, but in the end the comparison failed miserably. Discussing government programs is one thing, but comparing the act of food stamp recipients to feeding animals is another problem. Talk about having problems crafting your message. And doing it on social media. Where people can take screen grabs of your posts, crap on your rather quickly, and be forever archived for eternity.

In addition, it appears that Saucedo Mercer’s post is not original as a reader sent us the following image, which has been making the rounds on Facebook since June or even earlier: 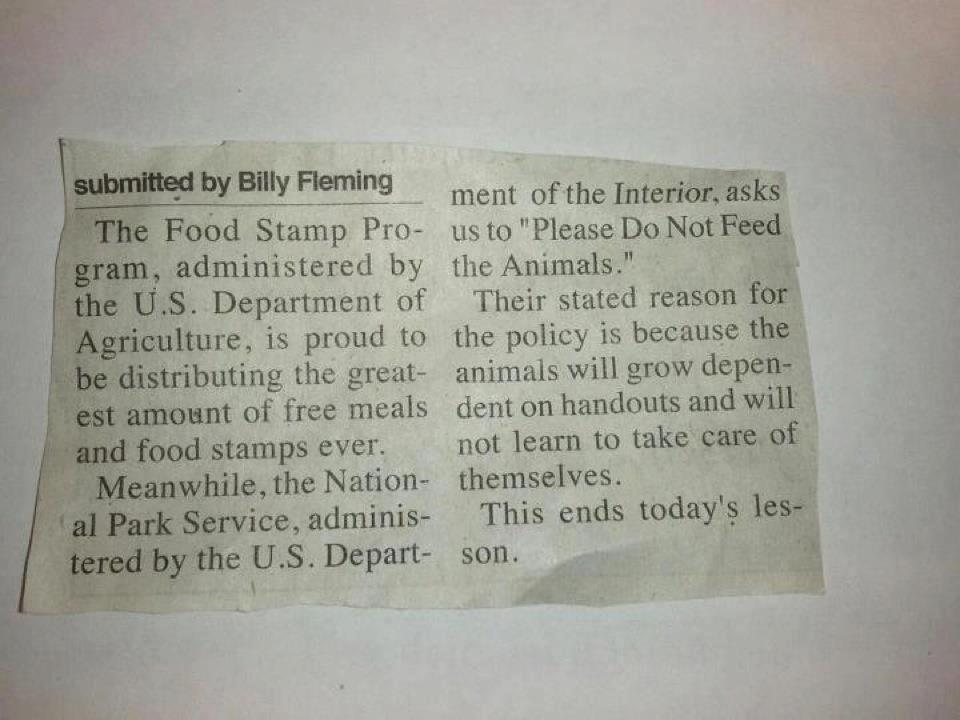 In March of this year, a Minnesota state representative had to publicly apologize for basically saying the same thing that Saucedo Mercer posted tonight.

Here are just some of the reactions coming from Facebook, including a troubling one about increases in food stamp purchases at military commissaries:

today’s lesson.. your career as a politician..done.

So let me get this straight: My family received food stamps when I was a child to get us through one of the most difficult financial periods of our lives and because we benefited from a government program (that , mind you, my parents and now my sister and I , Pay into so that we and others can benefit from said programs when they need help) it makes us caged animals? You called me a caged animal? the majority of the SNAP program food goes to children. . . . I hope you’re not a mom. Here is a ” lesson of the day” for you: If a person. . . we will call her Gab….Gail, we’ll call her Gail. . .decides to run for an elected public office she would be aware that what she says has far reaching implications on a national stage (no matter what public office) Gail, by simply running for said office, becomes scrutinized for every action and word she said. Mind you that as an American, you are entitled to the right of freedom of speech. As a public official who I’m sure has children in her district, she probably not call them animals. . . You know . . . because typically those children have parents over 18. . . who vote. . . Also, thanks for making me ashamed to be a woman. That concludes our lesson for the day.

Nearly 15 million children in the U.S. live in poverty. They are human beings who do not deserve to starve. How in the world can you call yourself pro-family when you advocate starving children and their families? Shame on you. Wow. That’s exceptional. So are we to assume that you have officially thrown down the gauntlet and are serving notice to Allen West, and Joe Walsh that the race to replace Michele Bachmann as the most despised politician in the country is wide open? We’ve got ourselves a ballgame folks! Did you know that the two largest groups of people who got SNAP (food stamps to you) were the 1.7 million people who were hit by Hurricane Katrina, and the second group are the families of American service members who are serving overseas? Are you calling people who are hit by a natural disaster and our military worse than animals?

Do you find your statement provocative? Funny? Clever? Your comparison here, showcases your true character, and how far removed you are from society, and the lives that most people are living. So tell me Gabriela, you are a single parent or perhaps your spouse left you or maybe you were a stay at home parent and your partner died, or you lost your job through no fault of your own, you are seeking work, waiting for your unemployment claim to be processed, you used the last of your savings to pay rent and utilities, and you have a loaf of bread, some peanut butter and half a gallon of milk to feed your three children until that happens. You don’t have anything left to sell, all of your family and friends are in the same boat as you are, and your kids cry themselves to sleep out of hunger, because they get to eat once a day. You don’t apply for emergency food stamps because you don’t want to grow “dependent” on the system? If your answer is yes, then you should go live inside a trash bin and starve to death. That is the only rightful place, for people that think the same way you do. DISGUSTING. Now, go enjoy your dinner and don’t think for one minute about all the homeless, hungry kids out on the streets of Arizona tonight. Oh wait…..I forgot……you don’t. Karma, I hope she finds you soon.

As of now, Saucedo Mercer’s Facebook page has not responded to any of the comments posted. Her official bio says the following about her background:

Gabriela Saucedo Mercer is running for Congress as a Republican in Arizona’s District 3 [sic] because it is time for a representative who will listen to the people and do what is best for Southern Arizona.

Gabriela Saucedo Mercer lives on Tucson’s west side with her husband of 24 years, Ted Mercer. Gabriela, “Gabby” for short, set aside her work career with a defense electronics firm in order to raise her 3 children and continue her education. As the kids were growing up Gabriela became more and more concerned about the direction that her adopted country had taken in recent years. She legally emigrated to the U.S. from Mexico in 1986 in order to live in a nation full of opportunity and Constitutional protections of individual liberties. She became a proud U.S. citizen in 1991.

Gabriela realizes that this country must adjust its current course and become more fiscally responsible while also freeing up businesses and individuals so that they can again grow the economy and regain America’s strong economic position in the world. The incumbent Congressman of 10 years, Raúl Grijalva, has consistently voted against the interests of businesses and families in the district.

We reached out to the Saucedo Mercer campaign tonight for comment, but we haven’t heard back from them. Once we do, we will let you know if they will be commenting about this story or not.