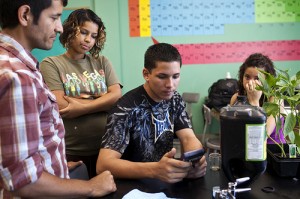 For decades, the presence of teachers representing minority groups has been sorely lacking in the education system in the United States. That’s the conclusion offered by a report from a study by Education Week  and Flora Family Foundation, that explored data from 1980-2009 taken from a U.S. Department of Education national survey of teachers and school administrators.

According to experts, minority teachers are important in the education system; parents of minority children often feel more comfortable discussing school issues with a teacher from similar heritage, and a diverse teacher population ensures children from all races have a supply of role models.

Research suggests that access to minority teachers may increase attendance, lead to higher test scores, and decrease the number of suspensions in the system.

As one of the fastest growing minorities, Hispanics are a prime example of the education gap. Latino children enrolled in school have far surpassed the number of Latino teachers available. The gap was recognized in the 1990s, when the Exxon Education Foundation revealed 11.8 percent of students were Hispanic and only 3.7 percent of teachers shared that heritage. More recent numbers indicate 21 percent of students are Hispanic compared to 7 percent of Hispanic teachers.

The Education Week study revealed the gap is not linked to a poor enrollment of Hispanics into college level teaching programs. In fact, the number of Latinos in such university classes have almost doubled from the 1980s, rising from 325,000 to 642,000.

What the research did show, however, was that minority teachers are 2 to 3 times more likely to accept positions in hard-to-staff systems in urban, high-poverty zones. In this manner, researchers say the minority teacher factor has been successful, but it is retention of those minority teachers which contributes to the national shortage.

The data indicates teachers from minority demographics are more likely to move from one school to another, and many leave the profession entirely. During the 2003 school year, for example, 47,600 minority teachers entered the profession — but approximately 56,000 left.

When the process was examined, researchers found that contributing to reasons minority teachers leave a school or the entire profession are issues regarding poor treatment from co-workers and superiors, and a poor work environment in hard-to-staff locations.

Because teachers from minorities are indeed available (based on the number of graduates with a teaching degree), schools and education programs need to design recruitment programs that reach the nation’s diverse ethnic groups. Part of the recruitment process means offering competitive wages and desirable work conditions. Decision making within a school will also keep minority teachers invested in the education program, creating a feeling of accomplishment and satisfaction when the school succeeds as a whole.

Hope Gillette is an award winning author and novelist. She has been active in the veterinary industry for over 10 years, and her experience extends from exotic animal care to equine sports massage. She shares her home with four cats, a dog, a horse, and her tolerant husband.