In  a speech that he gave yesterday at the National Council of La Raza’s annual conference in Las Vegas, Vice President Biden said the following:

Mitt Romney wants you to show your papers, but he won’t show us his.

Here is the full contenxt (and yes, the line was well-received):

The reference is a slippery one. Connect Romney’s resistance to releasing more of his annual tax records to immigration, because (wink, wink) Biden is talking in front of La Raza. Latinos love to hear about immigration. While many Obamaistas will call this move brilliant (like The Daily Kos, no surprise there: “Joe Biden is kicking serious Romney ass today. I mean serious ass!”), this is just another case of classic Hispandering (made popular this year by syndicated columnist Esther J. Cepada) with a side of Panderfiesta (as coined by Stephen Colbert). 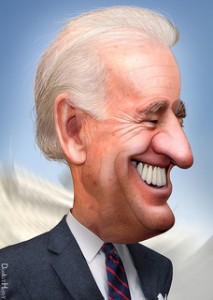 Memo to Biden and Obama 2012: even though the President is trying to change his tone on immigration and gloss over the promise he broke (don’t yell at us, yell at Jorge Ramos, who called out the President a few years back), many in the Latino community will attest to his administration’s record deportations. And the furor of SB 1070 and the Supreme Court has died down too. Yes, the “show me your papers” provision is still problematic, and many will try to fight it. But does the Obama campaign have to remind us all the time? It’s like an old joke that gets told over and over and over again. Move on and #NoMames.

But that is not the point here. Why why why must it always be about immigration at high-profile Latino conferences? Our advice to Biden and Obama 2012: keep your issues focused. Don’t mix your metaphors. Hit Romney on taxes-—Latino voters (and American voters in general) understand that issue. Hit him on his wishy-washy positions on immigration? Sure. But did you really have to make a reference to “‘papers” in this case? Do you not recall Chimichanga-Gate? Comments like Biden’s come across as forced, not authentic, and yes, patronizing and insulting. We know Romney has his problems, but does Obama 2012 have to be so glib and “witty” all the time? Be more humble about it and enough with the bad immigration lines. Latino voters care about (gasp) some of the same issues as other American voters. Health care. Jobs. The Economy. Education. Don’t tell them that we should always be angry at Romney (we can do that ourselves). We are smarter than you think.

This is a fail, Mr. Vice President. This line didn’t feel sincere at all. It is just classic pandering rhetoric that in the end makes you look silly and makes us wonder if the Obama campaign really understands that the Latino vote is not one to be taken for granted. This is beyond “immigration talk.” Many voters want results. Enough with the immigration metaphors. We got it.