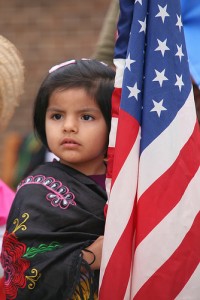 July 4th, Independence Day, is one of the most celebrated holidays in the U.S., along with Thanksgiving. The American people and those who are proud to be a part of the United States come together to celebrate independence and freedom. Many spend the day with relatives and friends. With so many activities to choose from, what can you do until it’s time for the grand finale: the fireworks? And how can you add a Latino twist?

1.- Go for a dawn run or bike ride. Get up at dawn and go for a morning run. If you hit the pavement early enough you may see the preparations for the 4th of July parade on the main street of your town – the flags, tents, tables and all the red, white and blue décor. If you aren’t a runner, take a leisurely stroll instead, as Latino families do, and enjoy the moment.

2.- Set up the American flag next to your home country flag! In order to honor both your countries, proudly display both flags on your front porch or window sill. In my case, I set up the Spanish flag too, as I am a dual national.

3.- Have a good old American breakfast. Invite friends over to feast on bacon, eggs, hash browns, pancakes, waffles or French toast. Add a michelada to the mix to give it Latino flavor. It is known as the hangover cure, but perhaps it could act in prevention. Why not try?

4.- Go to your local parade! Most towns have their own parade. I enjoy mine in Alameda, CA, which is said to be the longest parade in the country!

5.- Fire up your grill in your backyard or the local park. Go for finger foods like Spanish tapas, that you can also cook on the grill, instead of your usual hamburgers or steak. Hang farolillos and mix up the music. Who says you can’t play salsa or merengue on a July 4th celebration?

Here are some suggestions. You can also go the Latino way and indulge in a siesta instead!

7.- Fireworks time! Grab those blankets and head to your local fireworks display. Don’t forget to bring your cooler with beer or ice-cream, another favorite this day. The party goes on! Bring along sparklers with the colors of your native country’s flag. Instead of packing American beers, drink Modelo, Corona, or even Margaritas. Happy July 4th!

Laura Carbonell is a bilingual and bicultural language teacher at Casa Hispana in San Francisco, the place she calls home. She is a foodie and enjoys cooking and sharing her abuelita’s recipes. You may follow her on Twitter @Lauralcbl