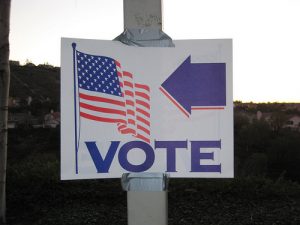 I’ll admit I’m at the point where I cringe when I hear someone say “there’s an app for that.” It was witty for a while. But the while is over. In fact, I think I know exactly when the novelty wore off, it was November of 2010 when Sesame Street released the “There’s An App For That” song. It’s gotten more than 1 million views.

So I had to double check my own reaction when I saw this, posted on Arizona Public Media’s website:

Voter Registration? There’s an App for That

It turns out a guy named Jason Libersky, a deputy voter agent in New Mexico, is using an app developed by his company called evotee to register voters at public events. He’s not the only one, the app is sanctioned by the Bernalillo County Elections office and reports indicate that since it began using the technology the number of voter registrations has increased.

Registrants carry the app on their ipads; basic information is gathered, pictures are taken of pertinent and required ID’s, sent directly to the registration office and viola!…or something like that.

Four things to keep in mind about this app: it seems to be working, it’s easy, it reaches people where they live and/or play, it increases voter registration. Imagine unleashing this thing among interested and eager citizens? You become deputized as a voter registrant (in places like Texas it’s relatively easy), carry the app in your tablet, run across someone who isn’t registered, and register them right there and then.

So far, that we know, only one county in one state is doing this. There’s work to be done…