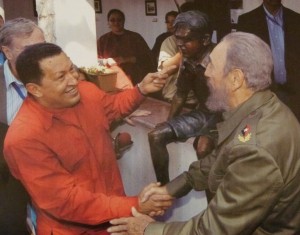 Veteran journalist Dan Rather reported Wednesday that Venezuela President Hugo Chavez is dying of cancer and might not live to see the October elections there.

According to the former CBS anchor’s Dan Rather Reports on the cable network HDNet, Chavez was diagnosed with metastatic rhabdomyosarcoma, an aggressive cancer that has “entered the end stage” and he is not expected to last “more than a couple of months, at most.”

Rather did not say who his source was but he did add that the person was someone close to Chavez “who is in a position to know his medical condition and history.”

“This is a person whom your reporter has very good reason to trust, but you should know that there is only one source so far; no other immediate confirmation,” he wrote. “All sources asked for and were granted anonymity because to reveal their names could place them in danger or, at the very least cost them their positions.”

Chavez is running for re-election in Venezuela and elections are Oct. 7.

Already however, less than 24 hours after the story was posted and began to be republished in other news sources and on blogs, critics began to question it’s veracity.

Eva Golinger, an award-winning journalist who is dubbed “La novia de Venezuela, questioned Rather’s report and his motivations in her blog, “Postcards from the Revolution,” late Wednesday night.

“Since Venezuelan President Hugo Chavez was diagnosed with cancer and a malignant tumor was removed from his pelvic region last June, all kinds of rumors, lies and speculations have circulated about his health,” wrote Golinger, a New York attorney and writer who has lived in Caracas since 2005. “Most of the hype has come from known anti-Chavez media, such as the Miami Herald and several online blogs run by right-wing extremists like Bush’s former Assistant Secretary of State Roger Noriega, who’s been obsessed with Chavez for years.

All cite unnamed sources who claim they have ‘insider information’ about the Venezuelan head of state’s health. It’s been unsurprising that those media outlets, known for their decade-long distortions of Venezuela’s reality, would publish such falsities and morbid tales about President Chavez. But that a serious, veteran, investigative journalist, such as Dan Rather, would indulge in the necrophiliac story-telling about the Venezuelan President is truly disappointing.”

Golinger says Rather was “quick to the gun to ‘break’ his ‘exclusive’ story and that the Venezuelan dictator’s recent appearances and speeches indicated he was well. On Tuesday, Chavez hosted a live TV cabinet meeting that lasted more than four hours where he even sang a few songs, as he is sometimes known to do, and reiterated his intention to be re-elected. “That’s a far cry from being on his ‘death bed,’ as Rather implies.”

Chavez has been public about his cancer, though he has not been specific about what kind it is. After his first operation in June, he underwent several chemotherapy sessions — some of which were done in Cuba. In February of this year, he announced another tumor had been detected in the same pelvic region. He returned to Cuba for surgery and more rounds of chemo and returned to Venezuela May 11.

In a tweet before he left the airport in Havana, Chavez wrote: “I am on the plane, on the runway at Jose Marti [Airport]. Heading for the Venezuelan fatherland. With more optimism than ever! We will live and we will conquer!”

This article first appeared in Voxxi.