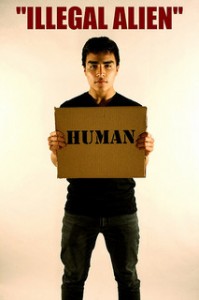 Nearly half of Latino Voters, 46%, find the term “illegal immigrant” offensive, according to a recentpoll conducted by Fox News Latino. The term has become one of the most inflammatory terms in relation to the ongoing immigration debate during this election cycle.

The Drop the I-Word campaign, started by the online magazine Colorlines, encourages politicians and the media to stop using the term “illegal immigrant”. Organizations such as the National Association of Hispanic Journalists and Unity: Journalists of Color have joined the efforts.

“It’s important for people to understand that we prefer the term undocumented because it’s more accurate,” said Ross Romero,  Senate Minority Democrat from Salt Lake City. “I think by and large, most folks came legally and overstayed their visa, so at most they are committing a civil infraction.”

Romero is third-generation Mexican-American who intends to run for San Lake County Mayor, and the Utah legislator responsible for proposing a piece of legislation that has been struck down, but which would’ve required lawmakers to undergo “cultural sensitivity training” as part of their orientation.

“To call them illegal is inaccurate and unnecessarily offensive,” said Romero.

This article first appeared in Latinovations.