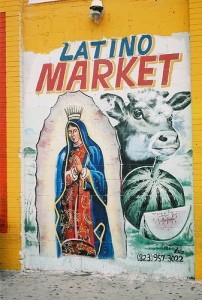 There was a time when the Nielsen Corporation didn’t see Latino consumers at all. This isn’t to pick a bone or re-live stale history, it’s merely a statement of fact, made to gain perspective. It wasn’t too long ago that Spanish language broadcasting was summarily ignored by the Nielsen big boys, regarded as second class broadcasting, not worth the effort to count as a viable market. That was as recently as the early 1980’s, before the days of the Univision boom, when sales people counted the UHF antennae on the rooftops of Latino neighborhoods to gauge their viewership – in those days only Spanish TV lived on the UHF end of the dial.

In those days the Spanish language broadcasting executives  longed to have their product counted along with the mainstream; they petitioned, cajoled and pestered Nielsen to include them in their regular count of television viewership.  But the mainstream (Nielsen was and is the arbiter of who and what is considered mainstream market) would have none of it.

Somewhere along the road a special “Hispanic” Nielsen count was invented – a kind of separate but not equal count, to appease the upstart Spanish people and poke around that market, to see what’s-what. The growth of the Latino market eventually blew that idea and we have what we have today.

Now, Nielsen can’t stop raving about the wonders of the Latino market. Some folks may say it’s about time, I’m wondering what took them so long. Market Watch touts Nielsen as “a leading global provider of information and insights into what consumers watch and buy,” and I’m sure that’s true in many market segments. But they’ve been late to the Latino market party. This week Nielsen released their latest report: The State of the Hispanic Consumer: The Hispanic Market Imperative (you have to admit, they came late but they made a dramatic entrance).

Here’s a line in the report summary that caught my attention:

It has become increasingly important to challenge commonly held misconceptions about the Latino market that undermine the importance of its size, uniqueness, and value.

So Nielsen, who once couldn’t see the Latino market, now defends against misconceptions and raises it to a market imperative? Someone should check the Mayan codexes, this may be a sign of the end of times. It’s a welcomed omen, nonetheless. Nielsen is as revered in the market as are stone tablets from mount Sinai. According to Market Watch;

“The Hispanic community in the United States is large and growing, and businesses must make strides to understand and engage these consumers,” said Susan Whiting, vice chair, Nielsen. “Due to the general youth of this segment, family focus, strong culture and prevalent Spanish-language use, Hispanic consumers are impacting all areas of work and play and helping to redefine American culture in the 21st century.”

Latinos have been saying that for years, but now that Nielsen has said it, it must be true. I guess we should be grateful for that. But a larger part of my brain asks why?