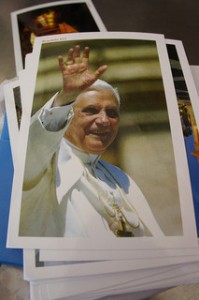 For the first time as his tenure as a pontiff, Pope Benedict XVI passed through Mexico last weekend during his Latin American trip. Though many of its indigenous people still felt a closer bond to his predecessor, Pope John Paul II, as many as 300,000 people came out to the city of Guanajuato before his held service in attempt to connect with the new pope.

But with a country shadowed by the underground totalitarianism of the Mexican Drug Cartel and other drug-related violence which has killed over 50,000 people over the past five years, the visit was a bittersweet one. The Pope commiserated with those ravaged by this issue, urging the country to “fight this evil” while asserting to Mexico’s youth to step away from the recreational drug subculture.

It would appear though that his cautionary words are gradually escaping their ears. With President Calderon’s grip slipping over a dichotomous country, poverty rates rising, and crime-related deaths swirling over the day to day lives of the people, statistics suggest that Mexico has come to a spiritual crossroad.

Though Mexico is known for its heavy ties with Catholicism, the percentage of Catholics in the country have steadily fallen over the past few decades. According to the 2010 Census, the percentage of Catholics has fallen to 80 percent nationwide, a significant drop off from the 96 percent figure shown in the 1970 Census. Taking a good portion of that gap, the drop has been filled by the rise of Evangelical Christianity.

And look no further than the small town of Zongozotla, Puebla as the poster child for this religious shift. Public Radio International recently visited the town of roughly 5,000 people, finding Catholics being outnumbered by the Evangelicals. In contrast to the rampant violence and vices that circulate through Puebla, the town had a peaceful ambiance to it.

Local pastor Horacio Lopez asserted, “Our descendants say before the evangelicals arrived the town was in a miserable state.” The town has generally prohibited the selling of alcohol for religious reasons, and has found itself in a much more sobering and content mood.

The town’s conversion could also be attributed to economical convenience. Zongozotla is one of the poorer places in the country, and many of its locals found that it was much too expensive to have to pay up for things like church weddings and baptisms.

Many families around the country are making the Evangelical conversion for these very reasons which inhabit Zongozotla. Mexico has found itself becoming more poor, frustrated, and scared while it continues to show no signs of economical or political improvement. With its government inadequately supporting the social structure, the people are beginning to look elsewhere for salvation.