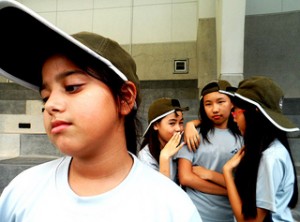 By José A. Healy

Latino students — and immigrant students as a group — are often most vulnerable to being bullied and teased by their classmates. They’re easy prey because of their limited English skills and lack of familiarity with teen rites of passage and U.S. customs.

However, bullying does not always pit white students against Latinos. Latinos bully Latinos, too. “It’s so easy for the oppressed to become the oppressor,” says Sergio García, principal at Artesia High School, situated near Los Angeles.

In New York City, the vast diversity of immigrants and ethnic groups engenders a divide and competition that triggers tensions among the many differing Latino groups and nationalities.

“It was more name-calling, teasing, put-downs. I never saw anything that got physical,” says Martínez. Now he teaches at Sam Houston Middle School in Garland, Texas, near Dallas, where cooperation and support among recent and past Hispanic immigrants is more the norm. He attributes the harmony to a greater appreciation for the high number of recent immigrants who live there.

“In my community, the culture is colorful. It’s loud, it’s lively. And the students are proud of where they come from,” he says.

When it comes to Hispanic girls, Anthony Peguero, assistant professor at Virginia Tech, tells Hispanic Link that first-generation Latinas are less likely to be victims of physical attack than more assimilated Latinas. Sexual harassment is a persistent and troubling trend for all Latinas, however, Peguero says.

The Virginia Tech assistant professor adds that it’s hard to track bullying statistics in the Hispanic community because students are reluctant to speak publicly on the abuses they face.

Peguero attributed part of this fear on the national narrative surrounding immigration and deportations.

“Students interpret that as not trusting authority,” said Peguero, who added that there was light at the tunnel for these youths: “People are now acknowledging this is a problem and this is helping people come forward.”

In Southern California, where a few million of its residents have roots in Mexico and Central America, bullying often consists of second- or third-generation Latinos ridiculing and intimidating the newcomers.

Luis Carlos Lopéz, at 24 an Arizona State University graduate who is now a correspondent in Washington, D.C., for Spanish-language Al Día of Philadelphia, remembers his trauma as an eight-year-old when he immigrated to San Fernando, Calif., from Nicaragua with a red shirt, a yellow Fred Flintstone’s cap and two pairs of pants.

“How come the new kid doesn’t change his clothes”?

A fellow student blurted that question when Luis had been there only a few weeks and to Luis’s further embarrassment, the teacher informed the class that Luis came from a family of poor immigrants.

Immigrant students were routinely referred to as border-hoppers, mojados (wets) and in English wetbacks and mocked for their pronunciation of English words.  Luis recalls vividly, “I learned English within a year.  My speedy pick-up of the language wasn’t based just on what I learned in class, but on the embarrassment of having other kids make fun of me.”

“It’s so easy for the oppressed to become the oppressor,” says Artesia’s García. The degrees of discrimination and teasing across different ethnic groups and nationalities vary from region to region, depending on how communities perceive immigrants and how accustomed they are to newcomers.

Jorge Gutiérrez, now a civil engineer in Phoenix, migrated from Salina Cruz, Oaxaca, Mexico, to East Los Angeles as a tenth-grader in the 1960s.  He still remembers the taunts and ostracism he and a few hundred other non-English-speaking (NES) Lincoln High School students from throughout Mexico and Latin America endured. To second- and third-generation Latino classmates, they were all “TJs” (from Tijuana).

Their counselor spoke no Spanish and when the immigrant parents picketed in protest, the Mexican-American parents counter-picketed in defense of the school, which had a 50-percent dropout rate.

The phenomenon of immigrants bullying fellow immigrants has a long tradition.  “We need to become united,” says Artesia High Principal García. “Until we do, we are not going to be able to empower others who follow.”

José Healy, who completed a reporting fellowship with Hispanic Link News Service last summer, was raised in Hermosillo, Mexico. He is currently pursuing his B.A. in history at the University of Dallas, where he is news editor of the student publication.  Email him atjose.healy@gmail.com.