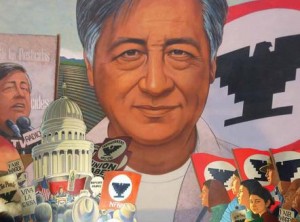 Do you have plans this weekend?  Well, whatever you do, plan on setting some time aside to honor the memory and legacy of labor leader and civil rights activist César Chávez on March 31, his birthday.  Chávez’s birthday is currently celebrated in many places throughout the country, and it’s a state holiday in some places, such as California. Recently, President Obama officially proclaimed March 31st César Chávez Day marking it a national holiday–leaving some individuals wondering whether this symbolic gesture has more to do with election campaigning rather than observance.

The man and his legacy. César Estrada Chávez was born near Yuma, Arizona on March 31, 1927. Born into a Mexican-American farm worker family, he spent his early youth working on farms with his family in Arizona, later moving to California, where he continued working the land. While he did not obtain a formal education past grammar school, he was a self-taught man. He learned economics, politics, methods of organizing, philosophy and history through self-study. It’s said that he believed all education should culminate in the service to others. And service to others was what his life embodied most.

As a farm worker from humble beginnings, he was exposed to injustice firsthand. Early experiences witnessing landowners exploit workers lead him to champion the cause of worker rights. After a two-year stint in a segregated U.S. Navy and after starting family, he became involved in community service and then civil and labor rights–where his legacy lies. He founded the National Farm Workers Association, which later became known as the UFW (United Farm Workers) labor union.

The UFW was successful in organizing several strikes, most notably, the Salad Bowl Strike–which lead the passage of legislation protecting the rights of migrant farm workers to unionize. Chávez’s methods of organizing and advancing the cause often included hunger strikes, and these nonviolent methods helped draw support to the UFW agenda. (Suggestion: Try a fast this weekend to commemorate Chávez.) However, some of the UFW’s tactics, like reporting undocumented scabs to INS and preventing undocumented individuals from entering the U.S., were criticized as being anti-immigrant, an allegation considered unfair and incorrect by official UFW accounts. Chávez died in his sleep at the age of 66 in 1993.

Pushing for national recognition.  Arguably the most influential Mexican-American civil rights leader, and perhaps the most well known, Chávez is considered nothing short of a hero by some and a model citizen by many more. In 1994, President Bill Clinton posthumously awarded Chávez with a Medal of Freedom, declaring Chávez a “Moses figure to his people.” César Chávez birthday (March 31st) has been celebrated as César Chávez Day in many areas of the southwest of the United States since the early aughts. It is a state holiday in California, and there are numerous events honoring Chávez in different cities.

Presidential Proclamation: Observance or Pandering?  A copy of President Obama’s 2012 presidential proclamation marking Chávez’s birthday as a national holiday has been circulating in Latino blogs and online forums.  A few cynics among us have gone as far as to question the timing of this proclamation, suggesting the White House’s symbolic gesture to honor Chávez is really geared at wooing the Latino vote.  However, before we accuse the White House of playing politics with our cherished icons during an election year, we should know that President Obama released presidential proclamations honoring Chávez in 2010 and 2011, as well–just as he said he would before gaining office.