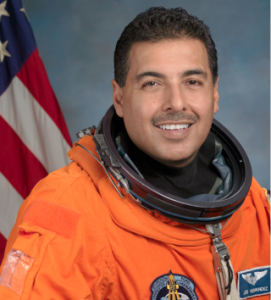 Having conquered the agricultural fields of California and the infinite black abyss of space, José Hernández is now taking his talents to the grinding media battlefield of politics. And after announcing his decision to run for congressman of California’s 10th district as a Democrat last October, he’s already found himself in a stand-off. Last Wednesday a law firm based in Sacramento asked the Sacramento County Superior Court that Hernández remove his “astronaut” title from the June primary ballot. The Bell, McAndrews, & Hiltachk firm argues that Hernández is no longer on NASA’s payroll, and he shouldn’t be allowed to use that title for the rest of his life.

Hernández was born from Mexican immigrant parents, working on the fields with them in his hometown of Stockton. He didn’t speak English until the age of 12. But in spite of his humble beginnings, Hernandez earned his Master’s in Electrical and Computer Engineering at the U.C. Santa Barbara in 1986.

He then spent the next several years of his career as an engineer until 2001, when eventually began his astronaut career in Houston, Texas at the Johnson Space Center. Here he eventually became a crew member on the space shuttle Discovery in 2009 (after launching into space, he became the first bilingual speaker to Tweet outside of Earth’s orbit!).

However, in spite of these extraordinary experiences as an astronaut, Hernández hasn’t received a paycheck from NASA since 2010. And California’s Election Code states candidates can only list their “current principle professions, vocations, or occupations” within at most the previous year. In response to this law suit, Hernández reacted a bit tongue-in-cheek, “I thought the hardest part of being an astronaut was the training, I didn’t realize it was going to be proving it in court.”

The finality of this case will be decided in court by this Thursday, which is the deadline for the California Secretary of State’s office to submit the formal list of candidates. Though the Bell, McAndrews, & Hiltachk firm may be splitting hairs in this circumstance, Hern Hernández andez will have to bank on the final decision being made in the spirit of the law over the letter of the law, as the firm is legally favorable in the context of this law suit.

In the meantime, Hernández is trying to minimize these distractions and continue concentrating on joining the House of Representatives this June. His opponent, Rep. Jeff Denham (R-California), also ascended to Earth’s troposphere as a member of the U.S. Air Force, but is probably crossing his fingers that Hernández’s astronaut title gets stripped from the ballot, as Hernandez did manage to get a little higher than him.