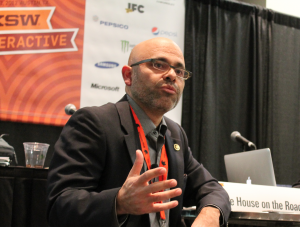 The White House is increasingly utilizing digital platforms in order to more effectively do outreach with the Latino community, according to a The White House on The Road panel Saturday at South By Southwest. And doing so is of particular importance to president Barack Obama because, according to José Rico, Executive Director for the White House Initiative on Educational Excellence for Hispanics, Latinos are essential to the future of the United States.

A recent study released by the initiative found that more than 3,000 Latinos across the country have been involved in meetings organized by the group. Social media guru Giovanni Rodriguez noted that these folks were organized in part online. Given that Latinos out-index almost all other groups on Facebook and Twitter, and thanks to online grassroots organizations like LATISM and Hispanicize, both state and federal governments have started to look at those groups for guidance, he said.

Specific to the White House Initiative on Educational Excellence for Hispanics, Rico said that Latinos are the future of the U.S. because one in three children born in the country are Latino, “if we are going to create the workforce of the 21st century, we need to make sure this population is prepared.”

Echoing the promise of the American Dream several times, noting that ones’ children could work hard to be better off, Rico said the 3,000 people with whom the initiative engaged wanted the federal government to partner with them to that end. Meeting around five different themes — the economy, education, health care, immigration and Latino heritage — Rico said the White House learned a lot. People are passionate about immigration, he said, and would even “yell” during summits about the issue.

Technology is increasingly a way the White House is seeking to engage Latinos. One way they have tried to engage Latinos is via a smart phone app that provides health care info. They’ve used crowdsourcing to help people understand the financial aid process and FAFSA. Google Docs and Shakira’s 9 million Twitter followers are other tools. And all of this has produced results, Rico said.

“We’ve actually seen a tremendous increase in college enrollment, and a slight but significant rise in high school graduations,” he said. This is due in part to President Obama’s focus on financial aid, he said, but also because of grassroots work to raise awareness of the importance of college to Latinos.

Ultimately, Rico said the White House will continue to engage with Latinos in any way that’s effective, particularly if technology continues to produce results. It’s not only of tremendous importance to Latinos, but the future of our country.