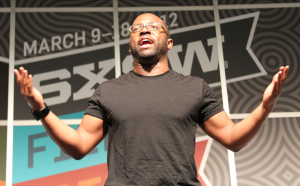 Comedian and author of “How to be Black” Baratunde Thurston gave a keynote speech to a packed crowd at South By Southwest Interactive Saturday afternoon. The gist of his speech was, essentially, that social media and satire/comedy have the power to change the world.

Thurston started his speech by talking about his family members, how former slaves and pioneering women affected his life with their experiences. Then he tied his experiences growing up with this family in an environment which he likened to “The Wire” to his outlook on his work.

He often had the audience in stitches with his self-satirical comedy, noting that he lived “The Wire” in 3D and that “we had everything ‘The Wire’ had except undying universal acclaim and white people who loved it.” Nonetheless, he spoke about how his satirical work at The Onion had inspired people from all over the world, and the effects of it in the U.S.

A large part of his presentation consisted of examples from around the world where satirical comedy — a la “The Daily Show” or cartoons — served as the only outlet for inconvenient truths. Specifically, Thurston noted that China, Egypt, Nigeria, Afghanistan and Iran were places where comedians were pushing the envelope and “revealing important truths mainstream outlets cannot.”

“We look to institutions for trust and they often come up short,” he said. “The media? They’re too busy talking about the state of the media. Comedians are willing to speak the truth.”

You can almost measure the freedom of a society by its tolerance for satirists, he told the audience, and with comedy and social media, everyone who creates content online is creating a revolutionary tool. There’s a need in society of satire, he said, and ultimately this allows us all to participate in the “upgrading of our own humanity.”