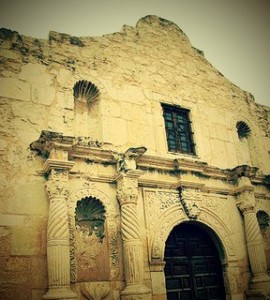 In movies and TV programs, the Mexican soldiers who participated in assaulting the Alamo on March 6, 1836, are always depicted in clean, almost new, beautiful uniforms. They are usually depicted wearing white trousers with or without a red stripe, blue or green coat, with or without epaulettes and a military cap with or without a white feather. Such uniforms did exist, but some soldiers did wear them but not all.  The forced conscripts who had been taken out of jails or picked up at various townships and ranchos along the way had no weapons, uniforms, equipment or training. One unit of 200 such conscripts was kept tied one to the other in single file and marched from San Luis Potosi, via Monterrey and Laredo to Bexar where they arrived December 9, 1835.

Mexican General Martin Perfecto de Cos surrendered Bexar the following day and the tied conscripts were forced to march back to Laredo, then Monclova, and finally back to Bexar where they arrived for a second time on February 23 1836. Many wore huaraches instead of shoes or boots. Many did not have blankets and at best some had serapes (shawls). None had raincoats, and definitely were not prepared for the blizzard that raged in February 1836 from Monclova, Coahuila to the Frio River in South Texas.  The conscript unit was attached to the First Vanguard Brigade commanded by General Joaquin Ramirez y Sesma. Also attached to the Brigade was Brigadier General Antonio Lopez de Santa Anna with a 50-man escort. The Vanguard Brigade was an experienced, battle-proven, mounted unit with two four-pound artillery pieces. The 50-man escort was composed of servants, chefs, supply and equipment carriers (tent, desk, writing supplies, paper, etc); both the Brigade and escorts were well equipped and wore the often depicted colorful uniforms.

The day before while at the Medina River (at the lower crossing at present Castroville, Texas), Santa Anna ordered the Vanguard Brigade to patrol the Caminos Real east and north of San Antonio de Bexar and block any reinforcements from reaching the city. He also learned on that day that the Texas rebels had retreated to the abandoned Mission San Antonio de Valero — commonly known as The Alamo. The majority of the city’s Tejano and Anglo population had been packing their valuables and provisions in their respective wagons and leaving the city to “tend to their ranchos.”

Upon entering the city on February 23, it was noted by Colonel Sanchez Navarro that the rebels at the Alamo had hoisted the Mexican Federalist flag with two blue stars (Coahuila y Tejas) and 1824 on the central white panel — in reference to the Constitution for which they were rebelling. As Santa Ana would discover, the Alamo defenders had 18 pieces of artillery including a 12-pounder hauled to the Alamo by Tejano rebel Damaso Jimenez. Situated on an elevation overlooking the city, the defenders had a definite military strategic advantage over any assault force. Moreover, walls of the various structures at the abandoned mission varied in thickness, from 18 to 36 inches. With plenty of foodstuffs and water from the Acequia de Valero and two wells, as well as a herd of 30 head of beef brought to the fortress by Tejano rebel Brigido Guerrero, the defenders could theoretically hold out until reinforced or relieved.

One disadvantage however, was that the defenders of the walls had to stand on the parapets, thus becoming visible easy targets  The 280 or so defenders included an unknown number of Tejanos serving under Captain Juan N. Seguin or Colonel James Bowie. In light of the situation, Santa Anna quickly ordered General Gaona to hurry his pace or at least send part of his brigade. Cuban-born General Gaona was camped at Espantosa Lake in present Dimmit County when he received the order on February 28.  He sent 1,000 men, but no heavy (siege) artillery pieces, as Santa Anna had not asked for them.

Accompanied by wives, girlfriends, merchants and other camp followers, the 10,00 men Mexican reinforcements arrived at Bexar at 4:40 p.m. on March 2, according to historical documents. Alamo co-commander William B. Travis erroneously reported the fortress was surrounded by some “1,500 to 6,000 men.” On paper, Santa Anna had some 2,500 men composed of the combined Mexican military force and non-combatants. Approximately 1,200 were ordered to assault the Alamo. The bulk of the Vanguard Brigade continued to patrol the Caminos Real and ordered to attack any rebel reinforcements, deserters or survivors of the battle yet to occur.

A 24-hour ceasefire was agreed upon on March 4 to allow all women and children to leave the fortress.  Some did, but many chose to stay with their husbands and family. The artillery exchange resumed on March 5, and the Mexican assault force was ordered to be ready take their assault position by midnight. They were also ordered to carry ladders, hatchets and their respective weapons — but no blankets, serapes or noise-making items which might alert the defenders. Silently, without alarming the defenders, they assumed their position by one in the morning. The bugle order to attack resonated at 5:30 a.m. and the assault on the Alamo began amid cries of “¡Viva Santa Anna!”

The battle lasted some 30 minutes. “Five or seven” defenders were captured and taken before Santa Anna, he ordered them executed as being non-residents of Mexico or Texas and therefore international mercenaries. Among those executed by the sword was former Congressman David Crockett. Tejano rebel Brigido Guerrero threw his weapons away, locked himself in a room and claimed to have been a prisoner of the rebels; he was freed and in the 1860s received a land grant and pension as the only known and documented surviving Alamo Defender. At least four Anglo American defenders rushed through Nacogdoches, Texas telling the populace they had just escaped the battle at the Alamo and that all had been killed. Two other men arrived at Victoria Texas, one of them seriously wounded and told of their escape from the battle at the Alamo.

Meanwhile, the Mexican casualties numbered some 550 men who either died in battle or of wounds received in the assault. As expected when a force attacks a fortress, Santa Anna lost one third of the force attacking the Alamo. In years to come both sides would exaggerate, embellish and outright lie about the battle. Most interesting, the Alamo defenders who had died for the Mexican Constitution of 1824 were not considered heroes — until the Texas Centennial of 1936. To date there is no accurate count or identification of the defenders and the popular legends, misconceptions and myths of the battle continue unabated. These include the erroneous claim that no Alamo defender survived the battle, that Travis drew a line on the ground, that Moses Rose (who did not exist) deserted by “going over the wall,” and that Bowie (who seems to have been dead since March 4) sat up in bed and “killed some 40 Mexicans.” Perhaps with more Tejanos doing their respective family trees we might one day identify some of the forgotten Tejano Alamo defenders.