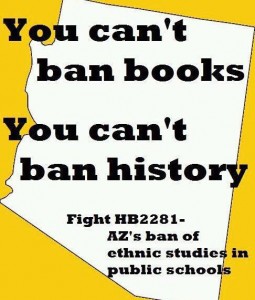 I am waiting for Marjorie Ann — my wife, Marlo, is seven months pregnant with her. Our soon-to-arrive daughter is named after her grandmother, my wife’s mother who died just before the start of Marlo’s senior year in high school. I never had the chance to meet her, but I’ve gotten to know her through the stories Marlo and her family tell: a free spirit who fearlessly loved her children. Yet if Marjorie’s experiences had been made into a book and taught to students of the Mexican-American Studies (MAS) program in Tucson’s Unified School District (TUSD), her story would more than likely be banned — because Marjorie was Mexican American.

On January 10 TUSD suspended the MAS program and in at least one classroom had books, written primarily by Mexican American authors, physically removed while a class was in session. In a press release TUSD explained that the books used in the former MAS program had not been banned but instead moved into storage and claimed the “stored” books were available in most of the district’s libraries. TUSD also claimed the curriculum taught in MAS will not be lost, but instead added to the general curriculum.

In 2010 93.6% of students enrolled in the MAS program graduated from high school; a comparison group had only an 82.7% rate. This gap in graduation rates has been consistent since 2005, according to TUSD’s Department of Accountability and Research. Higher graduation rates among MAS students means higher graduation rates for Mexican Americans, meaning more will be eligible for and attend college. The success of the MAS program and the changing demographics of the state, of the entire Southwest, mean that soon our governments will reflect this new and better-educated majority.

TUSD’s untenable position of inclusion by removal is the doing of current Superintendent for Public Instruction John Huppenthal, and his predecessor Tom Horne. Despite TUSD’s weak statement to the contrary, the only plausible goal of ARS 15-112 (the state law banning ethnic studies) is to target the Mexican American population in Arizona by diluting its history and delegitimizing the native voices of the state. Huppenthal and Horne seem to believe that the MAS program was creating an army of Mexican revolutionaries bent on overthrowing the government.

That works of fiction by Sandra Cisneros, Dagoberto Gilb, Manuel Muñoz and Luis Alberto Urrea (just to name a few, see entire list here) — coming-of-age stories about a young girl in Chicago and of men looking for work and love, of young men discovering their sexuality California’s picking fields and of a boy growing up in the streets of Tijuana, stories as meaningful and instructive as Marjorie’s — are somehow a threat to national security. I find it hard to believe that either Huppenthal or Horne actually believe an armed rebellion is marching their way. Instead what they really fear is demographic change. Horne, now Arizona’s attorney general, has been a hardliner against immigrants and immigration for years, accusing “illegals” of voter fraud. Neither man is working to stave off revolution, but cynically fomenting a culture of fear in Arizona.

Revealingly, neither Huppenthal (an Indiana native) nor Horne (a Canadian) are native Arizonans or from the Southwest — for that matter neither is Governor Jan Brewer (California) or Sheriff Joe Arpaio (Massachusetts).  While both men have lived in Arizona for a number of years, it is clear that neither of them has truly assimilated into the indigenous culture of Arizona. They do not, or do not want to, understand what it means to live on the border.

While I am waiting for my daughter to be born I am not waiting to make the schools she will attend better. I am working with groups like Save Ethnic Studies, UNIDOS, and the Librostraficantes to end the ban of the Mexican American Studies program and bring the books by our historians, cultural critics, and literary greats back to our classrooms. When Marjorie Ann Mendez is born I want her to live in an Arizona where she is not a second-class citizen, where her culture will proudly be represented in schools like it will be in her home. I want her to be free to learn about our heritage, our history and our stories just as freely as she will learn about her family, especially the grandmother for whom she was named.