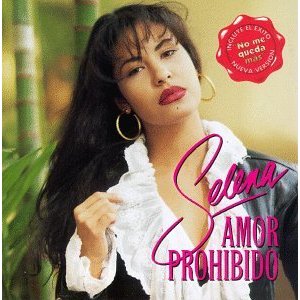 One of the most beautiful Tejano singers I know is back; Selena’s voice will once again roam the radio stations in the United States in the form of a new album of duets called “Enamorada De Ti.” But this time she will not be playing the same old songs, she will be singing old songs duet-style and with a twist in genre. This should be some great news, but it is not. I don’t find it appealing, or even remotely attractive to my taste in Tejano music, because this is not Tejano music anymore although they are re-using a Tejano legend.

I have seen this before, when singers are resurrected from the dead. They use the voice track from previously recorded material, adapt a new beat or rhythm, add another vocal, which in this case is a living one. For example the single “Amor Prohibido” is now a duet with Samo, a guy from the not-so-rock band from Mexico, Camila.

Now, it is more attractive to the popular ear and a broader audience, but it has lost all of its original essence in the process. I listened to this song three times in a row on different levels of quality to try and prove to myself that the “new” was always better, but failed terribly. Now, I can’t get that guy’s evangelically harmonious voice out of my head. He does know how to sing, but that is not the problem.

It’s Selena’s voice, but it’s not a Selena song. When I first heard news of these duets, I felt that maybe Tejano music was going to make a massive comeback with our beloved Selena. But once I heard this song, my dream vanished and I was left with nothing. Sadly but truly, for me it feels as if Selena is just a pretty voice and a measure in sync with another tune. This “tribute” represents nothing more than an attempt to make money.

Heck! Even Selena Gomez, Don Omar and Christian Castro are going to be on her songs “with her.” This is not a tribute, but an experiment. The “Selena Vive” tribute was millions of light years better, because it was an actual tribute. This tribute doesn’t get very deep. If the Quintanilla family wanted to sample their daughter’s awesome voice they could have just said so, sometimes I don’t get this family and their intentions behind of what they do with their daughters work.  Is it to share something to the fans or just to find ways to make it last longer and profitable?

This is the first single they have shared with us on their website. Hardcore Selena fans will agree with me that this isn’t what we expected; sometimes the commercial necessities erode rich and culturally filled content for the purposes of commercializing it and you find profit. But what about Texas and its Tejano roots, will they too be a feature of this “tribute”?  Will the new listeners remember Selena as a Mexican American singer who was brought up in Texas, or just as an accessory that sells even after death? Or even better, as a sing along tune that will be featured later on a talent show in Telemundo or Univision and for bodas and quinciañeras?

In the end, the Quintanilla family, or Televisa, can do as they please with their daughters’ work, whichever the case. They could even add it to commercial ads if they wanted. There are a few songs that could easily be adapted to some car campaigns or apartment rental ads. I just know for a fact that this is not going to make an impact of any sort, maybe only on some pockets, but for any artistic or cultural purpose there is nothing here.

As if music wasn’t austere enough, they have dragged our beloved queen of Tejano into their commercial metal machine.

Wuicho Vargas is a writer who lives in McAllen, Texas.