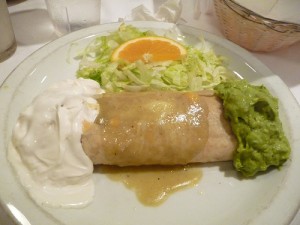 National politicians, and all those  hovering in their bubble, are clueless about Latinos when the fodder for their snarky remarks and sharp-edged banter comes directly from a dinner menu (the name of our publication came form our kitchen — a big difference).

Case in point: East Haven, Connecticut, Mayor Joseph Maturo, who’s much publicized idea of setting things straight with his city’s Latino community — after allegations surfaced of Latino profiling among his police force — was to say he’d eat tacos on his way home. And more recently, the hurricane in a sippy-cup that formed when an Obama campaign big shot tweeted a comment about the GOP, Latinos and chimchangas. Here’s the tweet, sent by Obama campaign manager Jim Messina:

Line of the day from WAPO's Dana Milbank: "The chimichanga? It may be the only thing Republicans have left to offer Latinos."

I’m mystified. First of all, I’m from South Texas where chimichangas are non-existent. I think it’s a quaint word, but it makes me think of dancing monkeys. Secondly, the road from the original comment to the tweet has too many twists to be taken seriously.

So let’s follow the dots. According to a Univision News Tumblr post,  the comment first appeared  in a Washington Post column written by Dana Milbank. In his column, titled “Does the GOP care about Latinos?,” Milbank took Sen. John McCain to task over his remarks at a hearing for the appointment of Cuban-born Adalberto Jose Jordan to a federal bench. Republican members of the committee were stalling the proceeding; according to Milbank, Sen. Rand Paul stalled the hearing for 30 hours becasue he:

wanted to use (Jordan) as leverage to secure an extraneous amendment (rescinding foreign aid to Egypt) to an unrelated bill (transportation).

Stick with me, this gets weirder before it gets ridiculous. It turns out that no one had the political will to stop Paul’s arm twisting.

Through the “debate” on the nomination, one senator after the other came to the floor — and ignored the delay.

Some spoke about transportation. Others spoke about the budget. Sen. John McCain (R-Ariz.) spoke about the wonders of his state. “The lettuce in your salad this month almost certainly came from Arizona,” McCain said. “It’s also believed that the chimichanga has its origin in Arizona.”

Milbank ended his piece with this stinger:

The chimichanga? It may be the only thing Republicans have left to offer Latinos.

Messina picked-up on the comment and tweeted his delight. And now he’s come under fire for being intensive to Latinos. The Hispanic Leadership Network — a conservative leaning Latino organization —jumped on the opportunity and started a Tweet-spat:

How insulting and condescending, @Messina2012 must apologize immediately and Obama must disavow

I find myself ill-equipped to sort this thing out. But a middle school teacher could put an end to this in half a second: Messina tweeted about what Milbank wrote about what McCain said. And because of that he’s insensitive t0wards Latinos. And yet the gist of Milbank’s idea is that the GOP is clueless about Latino voters.

Keep this in mind: Latino unemployment is stalled at about 11%; Latino education is dismal; yet Latinos are poised to carry the U.S. economy on their shoulders and hold a big chunk of the vote in key swing states. And we’re talking about tacos and chimichangas? If anything, that’s what irritates me. There are real issues to contend with, and the conversation reaches it’s highest pitch when the subject is food?  Even the undercurrent is a farce.