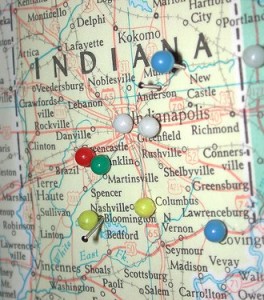 Indiana Governor Mitch Daniels signed the Compromise Illegal Immigration Reform bill, SB 590 into law on May 10, 2011. Then, the ACLU and the National Immigration Law Center filed a lawsuit to challenge the law they believed was unconstitutional and provided a basis for discrimination. On June 24 of last year, U.S. District Judge Sarah Evans Barker granted an injunction against the two provisions challenged in the complaint filed by ACLU:

In the complaint, the ACLU cited the warrantless arrest violated the 4th Amendment’s protection against unreasonable searches and seizures section; the law can lead to an unlawful arrest. ACLU gives the case of Louisa Adair, a Nigerian citizen, who was issued a removal order in 1996; nonetheless, she is free pending a request to remove the order. Under the Indiana immigration law, an officer would arrest Louisa even though there is no arrest warrant is in compliance with immigration law.

Furthermore, making it a misdemeanor for offering or accepting a consular identification is deemed unconstitutional since it interferes with U.S. foreign agreements (Article II, section 2, clause 2 of the U.S. Constitution); the injunction cites the inevitable conflict with the Vienna Convention on Consular Relations. The judge blocked this section, stating that, “while states like Indiana put effort in carving out laws that do not run afoul federal power… their results have proven to be seriously flawed and generally unsuccessful.”

The injunction cites the case of Ingrid Buquer, a Mexican national who is in the process of becoming a resident pending a U-visa approval; she has been issued a notice of action. However, if the sections were to be implemented not only would she be eligible for arrest, but uses a consular identification for banking purposes and other uses in which a form of identification is required.

As with other enacted state immigration laws, Indiana’s law also conflicts with both areas where authority belongs to the federal government and possibly the Constitution. The Indiana immigration case is interesting in that not only would the law have unanticipated consequences with the implementation of section 19, but would also conflict with foreign policy of the U.S. in the essential prohibition of consular identification cards. These areas of controversy illustrate the need for immigration authority to be held by the federal government; however, we will not know which direction the immigration debate will take until the Supreme Court decides Arizona’s immigration case.

Christopher Rangel is a student at the University of Texas at Austin.