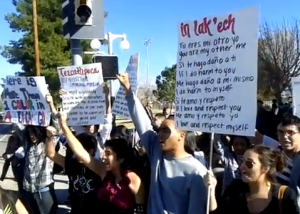 High school students in Tucson, Arizona walked out of their classrooms Monday in protest over the ban on Mexican American studies in the Tucson Unified School District (TUSD) recently. NewsTaco reader Ricardo Bracamonte shared with us his observations from the protests, and this is what he said:

My name is Ricardo Bracamonte an independent student filmmaker at the University of Arizona in Tucson. Early this morning hundreds of students from 4 schools walked out in response to the banning of Mexican-American studies two weeks ago. It seemed like there was approximately 250 students.

They left school around 9am met at Santa Rita Park and marched to Tucson Unified School District (TUSD) hand in hand. The schools averaged about 2 to 3 miles away from the park and it was about 1.5 miles to TUSD. The effort was sparked last night (Sunday) via social media.  At TUSD they listed demands to the district which included the reinstatement of MAS class, chanted and created critical dialogue among themselves. They chanted, “Sí se puede, sí si se puede” and “When our education is under attack, what do we do? Take it back!” [And] the students also recited “In Lak’ech'” several times.

They chose to not speak to the media because of their portrayal of their interviews in the local media.  The students were peaceful and they said they plan to be proactive to regain their classes.  There were cops following one group at first and then they followed the larger group. Cops were waiting at Santa Rita and TUSD.

In response to the ban, one of the groups organizing the protests, UNIDOS, organized a “Tucson community’s School of Ethnic Studies” today. Part of the school’s mission is to allow members of the community to share why Mexican American studies is important to them, as well as to make demands: that  the ban be lifted and that  all cultures fit into the definition of “education.”

Three Sonorans also took video of the walkouts, here they are below: