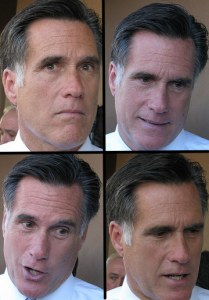 Mitt Romney was acting a bit temperamental  yesterday as he sought votes from  Latinos, particularly in Florida. He proudly released a Spanish language video in which his son Craig spoke near accent-less Spanish praising his father and his father’s family values, in which the candidate himself also spoke Spanish, and several Latino legislators through their support towards the presumed GOP presidential nominee.

What seemed like 5 minutes later, Romney was saying that he was “proud” to be endorsed by the architect of Arizona’s SB 1070 law, one which has resulted in the harassment of Latinos across the state, regardless of legal status. Also, the gentleman in question, Kansas Secretary of State Kris Kobach, helped the state of Alabama with their recent immigration law, that has resulted in tremendous losses for the agriculture industry there.

For Romney to, at once pledged his undying love for Latinos and their “values” just as he’s praising a man who has targeted Latinos living in this country so pointedly, is actually kind of confusing.

What makes it even more confusing, is that, prior to Wednesday, it seemed pretty obvious where Romney stood. He said very plainly that he would veto the DREAM Act if elected president, then he called it a “handout,” he even walked away from a young lady who was trying to speak to him about a lot a campaign event, and has been campaigning on “securing the border” in South Carolina ahead of that state’s primary without defining what that means.

The only thing that seems out of place here, is his Spanish language ad.

Everything else Romney has set up to this point, has been in keeping with his need to attract conservative voters by throwing Latinos under the bus. But all of a sudden, he feels the need to reach out to Latino voters, and emphasize his Latino connections (his father was born in Mexico). As we’ve reported before he’s: opposed immigration reform (until he said it was reasonable),  he’s campaigned in Puerto Rico, yet says we should only speak English in this country (as he released Spanish language ads),  and to top it all off, he himself has hired workers without papers.

Can Mitt Romney genuinely say he wants Latino voters’ support, while speaking out against so many issues important to this community? Apparently, he can.