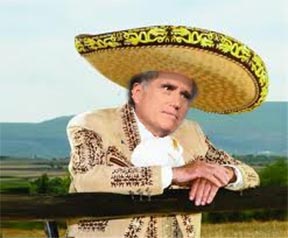 In response to Mitt Romney’s recent win in the New Hampshire primary, the parody of the presumed GOP presidential candidate emerged on Twitter. Using the handle @MexicanMitt,  the accounts has parodied Romney as an opportunist, job killer, corporate fat cat, and more. Sometimes using vulgarity, in either English or Spanish, the account in just about one day grew to 700 followers, and had the Twittersphere abuzz with admiration.

As with the now-famous @ElBloombito Twitter account mocking New York City Mayor Michael Bloomberg that currently boasts more than 28,000 followers, Mexican Mitt appeared at a timely moment in the political cycle.  In the sense that, in the same day Romney premiered an ad in Spanish, he boasted he was “proud” of being supported by the author of Arizona’s SB 1070, as well as Alabama’s immigration law.

We had the chance to interview @MexicanMitt  and here’s what he had to say.

NewsTaco: You seem to love enforcement immigration policies, how many of your own Mexican family members have you deported?

MexicanMitt: I keep deporting them back after they finish working for me selling oranges. So I don’t think of it as deporting them, more like firing them

NT: Did you send your children to Spain or Costa Rica to learn Spanish?

MM: I sent my hijos to be missionaries to all the backward countries where they espeak espanish. Like Los Angeles and El Paso.

NT: If elected president, how would you top President Obama’s deportation record?

MM: This thing is in the bag for me, so I am already planning to top that socialista’s record by also deporting people with limited English skills, like Rick Perry and Sarah Palin.

NT: How many more fences along the border do we need in your opinion?

MM: I will buy Wal Mart and convert it to a BorderwallMart, that way we can protect our borders, and make money at the same time. And I can fire more people! ¡Ajúa!

NT: What are Latinos good for, just gardening, or also running the state of Michigan like your dad?

MM: I enjoy the Mexican way of life, lots of good food, beautiful ladies, glittery mariachi pants. They don’t call it MITTchoacan for nothing! Mexicans make excellent naranja sellers, except for my dumb primos!

NT: Why did you decide to join Twitter in the middle of your campaign? What pushed you to come out as a Mexican?

MM: Mira, peoples were saying I was so boring, so I decided to let everyone know I was born this guey! Since Herman Cain, who barely spoke Cuban, left the campaign to touch the ladies, I decided I’d better espice things up! And Twitter is the perfect way to reach out and touch the ladies without getting sued.

NT: If you could tell every Latino in the country one thing what would it be?

MM: You poor people are simply YEALOUS of my REECHES

MM: To win before the Mayans ruin everything…AGAIN.