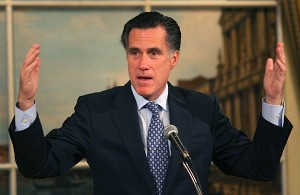 Republican presidential candidate Mitt Romney touted the endorsement today by Kansas Secretary of State Kris Kobach, author of several anti-immigrant laws across the country including Arizona’s SB 1070, on his website.

“I’m so proud to earn Kris’s support,” said Romney. “Kris has been a true leader on securing our borders and stopping the flow of illegal immigration into this country. We need more conservative leaders like Kris willing to stand up for the rule of law.”

As previously reported on La Plaza, Kobach is the author of two of the harshest immigration laws in the country, Arizona’s SB 1070 and Alabama’s HB 56.  Both laws force law enforcement officials to question the immigration status of anyone they detain during routine stops, although legal challenges have left this provision in limbo.

“We need a president who will finally put a stop to a problem that has plagued our country for a generation: millions of illegal aliens coming into the country and taking jobs from United States citizens and legal aliens, while consuming hundreds of billions of dollars in public benefits at taxpayer expense,” said Kobach.

Recent revelations, such as Romney own comments on the campaign trail that his father was in fact born in Mexico and didn’t move to the U.S. until the age of 5 or 6 years and that he has family members currently residing in that country have raised questions over his tough immigration stance.

Kobach has said in the past he will continue his work to pass tough immigration laws across the country.

“Mitt Romney is the candidate who will finally secure the borders and put a stop to the magnets, like in-state tuition, that encourage illegal aliens to remain in our country unlawfully. He is also the candidate who will stand shoulder to shoulder with the states that are fighting to restore the rule of law. I am pleased to stand with this true conservative,” Kobach said.