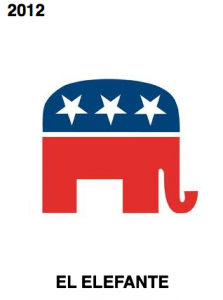 A new survey found that an overwhelming majority of Latino voters believe the Republican Party is “hostile” toward them and is alienating them.

The impreMedia/Latino Decisions survey also found that not even a potential nomination of Latino Sen. Marco Rubio as vice president could do much to change their sentiments.

Another key finding of the survey is that Latinos are turned off by Republican’s support for tougher immigration enforcement over the creation of a path to citizenship.

“Over the last five years, a lot of Latinos have been upset and moving away from the [Republican] party because of the hard stance on immigration,” said Matt Barreto, Principal Pollster for Latino Decisions. “So the Republican Party has a lot of work to do.”

A total of 500 registered Latino voters were included in the poll. It found that Latinos persistently lean toward President Obama and Democratic candidates, with 46% of them saying that Republicans “don’t care too much” about Latinos. Almost a third, 27%, said Republicans “are being hostile.”

The survey is also the first to examine Sen. Rubio’s favorability with Latino voters from across the nation. If Rubio were to be nominated by Republicans as vice president only 13% of respondents said they would be “much more likely” to vote for the GOP.  Almost half of the respondents, 46 %, said it would “have no effect” on their decision.

As a voting bloc, up to 22 million Latinos are expected to be eligible to vote in 2012, Latinos will play no small role in the outcome of next year’s elections. The winner in swing states with large Latino populations like Florida, Nevada, Colorado, and even Virginia could very well be determined by the Latino vote. These are all states won by President Obama in 2008.

“Having Rubio on the ticket will probably galvanize Latino Republicans and get more of them out to vote, but it probably won’t have much effect in getting crossover votes from Latino Democrats,” said Gabriel Sanchez of Latino Decisions.