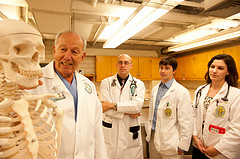 According to a recent study published by the Association of American Medical Colleges, the diversity of full-time medical school faculty has not kept pace with students or society.

The data shows while there are more women and minorities as medical school students and faculty members today than 40 years ago, “the lower retention rates, lower promotion rates, and longer times to promotion for women faculty and non-white faculty” suggest that there are still inconsistencies to be dealt with.

The study examined the student and faculty population in U.S. medical schools between 1969 and 2009. On a positive note, researchers found that newly appointed faculty were generally more diverse than continuing faculty:

But once they began to examine the higher ranking professors and staff, diversity tended to decrease. Though, if women and minorities continue to fill more positions, and if they are able to retain them and move up, this could change as time goes on considering, “the relatively recent arrival of these demographic groups to academic medicine in appreciable numbers may require time for a significant presence among the senior ranks.”

Either way, considering the importance of minority representation in schools and the changing demographics of the U.S.,  medical schools should use these findings to speed up the process of diversifying their faculty so that the communities they teach and serve are being reflected.