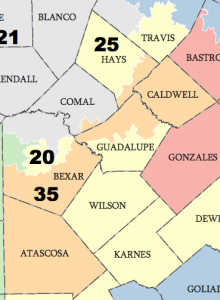 The announcement today from San Antonio Congressman Charlie Gonzalez that he will retire when his term expires has reconfigured the cast of candidates looking to get to Congress in 2012. Now, Joaquin Castro is set to run in Gonzalez’s seat, district 20, paving the way for former Congressman Ciro Rodriguez to run in the newly created 35th where Castro had been campaigning since June.

Roriguez told NewsTaco, “We’re filing the first day. The 35th has the majority of the area that I have represented before in one form or fashion. I’ve represented 80% of the district before,” he said, adding that since he left Congress in January he hasn’t stopped working. Rodriguez told us he’s been doing voter registration and education, most recently in Maverick County.

“I feel good about it,” he said, noting that he wants to get working on issues pertaining to the nation’s ailing economy.

As we mentioned recently, Castro (whose brother Julián is the mayor of San Antonio), has been campaigning in the 35th, a district that up until now had snaked between Austin and San Antonio. On Wednesday, a panel of three federal judges issued temporary maps that cut out Travis County (Austin) from the district, giving it back to current Democratic Congressman Lloyd Doggett, and restored Bexar County (San Antonio) to the 35th.

Castro has been campaigning on a platform in the 35th of uniting Central Texas for the sake of future economic development, now that he has switched districts, it appears that he and his brother will have the combined powers to truly foment powerful change in San Antonio.

Castro told us his decision began at 5 p.m. Friday when Congressman Gonzalez called him to encourage him to run in the 20th. “We had a great conversation, he encouraged me to run. It caught me by surprise.” Castro told NewsTaco that, although he’d been campaigning for six months to be a regional representative, changing gears to run for a straight San Antonio district is not wholly untrue to his previous campaigning.

“I grew up in the 20th congressional district. I always dreamed about serving [there], but would never have dreamed about running against Charlie [Gonzalez]. This was a surprise to everyone, it’s a wonderful opportunity to serve the community where I was born and raised, and to continue the legacy of service that the Gonzalez family has laid for San Antonio,” Castro told NewsTaco

“I think a lot of the issues I’ve been talking about absolutely still apply to this district and I still want to reach out beyond the boundaries of my district and my city to work with others to build up our region,” he explained.

As far as what went into his decision to switch districts, Castro said it was mostly a personal one — although he told us the 20th is a “solid Democratic district, majority Hispanic district” that is more Democratic than the 35th where he was running or the 23rd district.

“This was straight from the heart, really,” he told NewsTaco. “The opportunity just presented itself this evening, so it was an easy decision for me because, literally, my entire life has been spent in the neighborhoods that make up the 20th congressional district.”

Plus, having a brother who’s mayor of one of the top 10 largest cities in the country will definitely enable the twin dynamos to make things happen there. “Julián and I think we’ll be ale to work together and do great things for the city. I think we can work incredibly well together,” he said.

[Photo By State Of Texas]