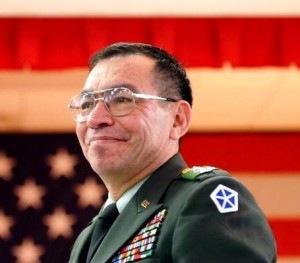 I would like to thank all Veterans of the U.S. military for your service to our nation.  On this day of observance, remembrance, and appreciation, there is much for which to be grateful.  Veterans everywhere have reason to be proud.  And we all have reason to honor their service.  Throughout our history, Veterans have answered the call to duty when American security has been at risk – never wavering to preserve the American way of life.

During this difficult period in American history, I believe all of us who have the honor of calling ourselves Veterans stand at a crossroads. We must decide whether  to answer the trumpet’s call to duty once again. The threat this time is to our own veterans community as we bear the burden of misguided policies coming out of Washington.  Every time I read about another law being suggested or passed that harms veterans, it takes some time before I can actually believe it.  In our national climate of fiscal austerity some professional politicians are proposing to reduce veteran retirement benefits.

The Congressional Budget Office, for instance, has proposed all kinds of negative changes for the veterans health care plan, TRICARE for Life, including limiting benefits for retirees and their dependents, increasing costs paid for prescription drugs, and even ending medical care for some veterans.  There are also proposals for capping increases in Military Basic Pay and removing the entire current Military Retirement System and replacing it with a 401K system.  The latter proposal would not guarantee a veteran’s retirement pay if Wall Street crashes again.  Such a proposal is akin to privatizing Social Security.  We must not allow veterans benefits to be targeted by financial institutions as a potential “cash crop” waiting to be harvested.  Whether these misguided actions come from Democrats or Republicans, they both disrespect and threaten the future of all those who have faithfully served our nation in uniform.

With the current state of our economy, our veterans have a tough enough time just making ends meet.  We simply cannot allow veteran retirement benefits to be negatively impacted by politicians in Washington who have never served in the military and do not understand the sacrifices associated with service.  How can the greatest nation on earth allow our young veterans returning from Iraq and Afghanistan to go jobless and, sometimes, even homeless?  Such a system simply perpetuates even more sacrifice from our veterans and their families after their terms of active duty have ended.  Our federal and state governments must step in and solve these problems right now – RIGHT NOW!

Many years ago, when I was a young man in uniform, I was spat upon by protesters of the Vietnam War.  I will never forget that moment.  And I will never forget or lose my admiration for veterans everywhere who have faithfully served our nation in a foreign war – whether popular or unpopular.  Any time our political leadership commits our nation to war, we must be certain that such a commitment is worthy of the sacrifice made by our men and women in uniform.  And once that commitment is made, we must engage all of America’s resources to ensure a rapid and uncompromising victory.

We must never forget our Veterans.  We must honor and protect the men and women who willingly enter the battlefield to preserve our freedoms.  There is no more noble calling in American life.

Happy Veterans Day to all our nation’s veterans.  We thank you for your service.  May God Bless.

Lieutenant General Sanchez is a candidate for the U.S. Senate from Texas. On June 14, 2003, he was named Commander of Combined Joint Task Force 7 in Iraq.  He was responsible for one of the largest combat forces ever deployed in United States military history.  In 2006, Ric Sanchez retired from the U.S. Army after 33 years of loyal service to his country.