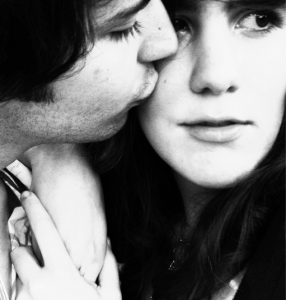 I was in my father’s hometown in Mexico tying some loose ends – signing off some property that was left to my name as part of my inheritance. My intention was not to be a landowner in Mexico, because it would only be a matter of time before someone told somebody else in charge that I was not the Mexican citizen I pretended to be. American citizens cannot own property in Mexico, after all.

But it wasn’t all business, part of the trip was filled with pleasure, unfortunately for me, the rules of attraction are written differently in Yurecuaro, Michoacán. The holding of hands is seen as something intimate that is only reserved for couples – so if you are seen holding someone’s hand, you better have the intention of putting a ring on it.

I remember I had one particular dinner date where the young lady brought along her mom and little brother. Her mother kept telling me that he daughter knew how to keep a clean house – all the while I just wanted to know her favorite song. We were at a fancy seafood restaurant and the little brother kept making a scene because he did not like shrimp and wanted tacos instead. I could not get the girl to speak more than two words. She chewed her gum and twirled her hair. She introduced me to the waiter as her boyfriend – from the United States — and suddenly our service improved. My drink was not allowed to reach the halfway mark before he came back to refill it.

In the span of one date, I had a girlfriend, a mother-in-law and a monster restaurant bill because my future brother-in-law had the waiter go across the street and buy him some tacos – at a modest convenience charge. To top it all off, I still did not know what her favorite song was. Needless to say it was a horrible date void of chemistry – or so I thought. I came back home and chalked it all up to the inexperience of being in over my head.

Two years have passed since the last time I spoke to her and a couple of days ago, I received a Facebook message from her. She wanted to know what happened to me. She thought we had hit it off quite nicely and wanted to know if I was interested in making her an honest woman – although in retrospect, she demanded an answer because she was not going to wait around forever. I had no idea she was waiting. She already has a wedding planned out. We are supposed to be getting married next Valentine’s Day and then vacationing in Disney World. She does not want children because she is trying to keep her figure and she hopes that I have a dishwasher because her momma did not raise her to a slave to the kitchen.

Part of me is willing to do it, if only to entertain and improve my writing.