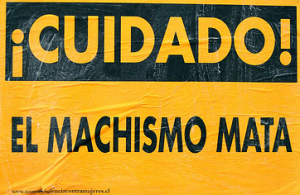 I suppose you could begin at the beginning, talking about princesses versus G.I. Joe or working on cars versus working on dinner, but as a twentysomething, educated Latina, I find that machismo — and my strange relationship with it — is much more relevant to my daily life now. Because I understand, intellectually, that machismo is a cultural construct that exists to varying degrees in different cultures, but that doesn’t prevent my visceral responses to these cues when I run into them.

So now is a good time for true confessions. I love a strong, hairy, burly, well-fed, commanding, in-control, macho. It’s true. I don’t like men trying to control what I say, how I say it, how I dress, where I go, with whom I speak and just generally being insecure jerks trying to empower themselves by taking my power away. Therein lies the dilemma.

I have definitely, over the decades, drunk the macho Kool-Aid, I’ll admit it.

But then I find myself in professional situations, as a modern, educated Latina, where this machismo business really slows my roll. You’re mocking my opinion to my face, seriously? You’re asking me to fetch you coffee? You’re staring at mt chest to my face? You’re asking the man sitting next to me to explain things of which I am expert? I think what bothers me the most is being dismissed by these machos for the mere reason that I have ladyparts. Ay yai yai, this cultural stuff is so complicated!

Perhaps this is just the way I explain my love of certain macho characteristics to myself, but then again it goes both ways. With the machismo comes the marianismo — or the Virgin Mary-like familial piety that’s on the other end of this cultural continuum. And just as I like it when a man opens doors for me, I know some men enjoy the affection that accompanies being served their food, or being the leader or being asked to solve a problem.

Yin and yang, a lo Latino. Perhaps this cultural identity stuff isn’t so complicated, after all.